Dante and other waning classics 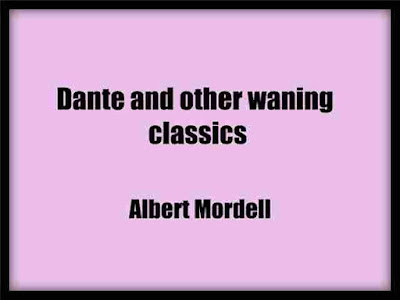 I have chosen for critical examination six of the most famous classics of Christendom. These include two highly lauded epic poems of modem times, the Divine Comedy and ‘Paradise Lost; two works the circulation of each of which has been surpassed only by the Bible, the Imitation of Christ and Pilgrim's Progress; a noted religious autobiography, St. Augustine’s Confessions and an important product in Christian apologetics, Pascal’s Thoughts.
These works are saturated in whole or part with teleological dogmas that have been discarded by many people today. It is my intention to show how medieval fallacies have ruined what might otherwise have been perfect literary masterpieces.
The passages in these books that still live are the secular ones. These we can still read with enjoyment, but the authors regarded them as subsidiary to the theological intent. I have tried to point out that the literary value of these classics has waned in proportion to the extent and falsity of the theology pervading them. Literature should not be a vehicle for theology.
The poet often must describe sensations the theologian fears; he must express ideas the latter dare not think. Theology attaches itself usually to untenable and evanescent dogmas; its spirit is that of restraint; its atmosphere is confining. Literature shuns creeds and edicts and theories; it knows few barriers; it seeks the open.
The chief mission of literature is often to undo the evil work wrought by false theologies. It is sublime when it depicts tragedies due to conformity with theological 6 Preface ethics. It is glorious when it shows us types who have emancipated themselves from tenets that enslave the mind and stifle the soul. literature deals with realities, theology with illusions.
One is the worship of beauty, grants deference to the senses, advocates liberality of speculation; the other means fig leaves and cramping garments, horror of the body and the natural emotions, enmity to the daring investigation. The paths of literature and theology lie in opposite directions. One is ever seeking new truths, the other rests content with the old. One loves liberty, the other bows to authority; one breaks down idols, the other worships them.
One is restless, ever-questioning, ever animated; the other is passive, subscribing to some faith and chilled to the marrow. Literature takes man as he is; it roots itself in human nature and material as well as spiritual desires; it shows us the individual with his impulses to exercise all his faculties and satisfy his instincts.
Theology is taken up with devotion and repentance; it aims after piety; it wishes to dehumanize man. “ If literature is to be made a study of human nature,” wrote Cardinal Newman, who certain!}" was no enemy of theology, “you cannot leave a Christian literature."
It is a contradiction in terms to attempt a sinless Literature of sinful man.
It is a matter of great regret that some of the ablest writers should have embraced doctrines that have become obsolete. What a pity that the presence of exploded dogmas should vitiate literary performances! It is still sadder when we find that the entire substructures of some classics are founded on the fossilized remains of false principles.
Contents:
--Dante: The divine comedy.--Milton: Paradise lost.--Bunyan: Pilgrim's progress.--A. Kempis: The imitation of Christ.--St. Augustine: Confessions.--Pascal: Thoughts
the book details :
Download 4.4 MB