Posterity, its verdicts and its methods; or, Democracy A.D. 2100 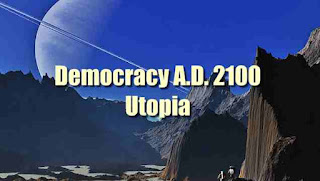 The story is a political utopia, a depressed  English man travelling to the year 2100. with a help of an inventor.
Excerpt:

"In the year of our Lord, 1897, I had some reason to be tired of my life. Fortune had been very unkind to me through a series of disastrous years, and I suffered from a depression of mind which made existence an intolerable burden. But the longer I reflected upon it the more puzzled I became as to the means by which I could most decently, and with due regard for appearances, make my exit from a stage on which I had become superfluous, and upon which circumstances beyond my control effectually prevented my appearing with the dignity which to most men is the first necessity of life.
In this predicament, I determined to consult my old friend, Kelvin Grove, whose arguments in favour of euthanasia had greatly interested me in former days. I called upon him and expressed my surprise at finding him at liberty so early in the day. " I have given up the medical practice," said he, " in ordev to have more time for the study of a very important question — nothing less, in fact, than the problem of death." ''The very subject I came to discuss with 3'ou/' I said.
I gave him a short history of my troubles and soon convinced him that the Next World, little as "we know of it and dim as is our conception of it, had more attractions for me than this scene of ill-fortune undeserved and of disaster un- expected. " You want a tonic," he said. '* You must have a change of air and of the scene." " Can these put back the hand of time? Will they restore to me the esteem of those whose goodwill was more to me than mere fortune or worldly success?  " By-and-by you will take a saner and a juster view of life and its duties." ''My world is out of joint. I am determined to have done with it."
He felt my pulse, sounded my heart and lungs. "You are as sound as a roach, and you are just the subject I am looking for. Come to me in two months' time, and if you are then in the same mind I will do for you all that you ask and ignore. Take plenty of exercises, seek cheerful society, and come back to me in good bodily and mental health." I carried out his programme, and I soon felt that our humdrum world still had attractions that I had overlooked or forgotten.
Nevertheless, in two months I presented myself again before my friend, and when I told him that whilst I had never before truly appreciated the world and its advantages, yet my design was unchanged, he did not conceal his satisfaction.