A primer of right and wrong 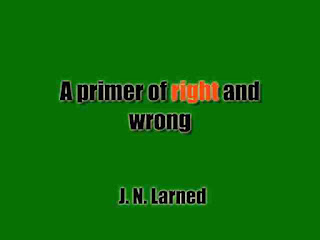 The word RIGHT, as we all know, has a number of meanings that seem to be not much alike. As we use it in geometry, speaking of a " right line," we mean a line that is straight. We use it in another sense when we Meanings of the word say of some action that it "right." was "the right thing to do;" and in this case, we may mean that it was the wisest action that could be taken, or we may mean that it was morally the best thing to do, the true thing, the thing which ought to be done, because of goodness in itself which we are able to see.
In still another sense of the word we may say that men have a right to the free use of their minds in thought, and of their tongues in speech, and of their hands in work, so long as they harm no others ; and then we mean that if such freedom is taken away from them they are abused and oppressed.
Now, these and other meanings of the word RIGHT may seem to differ widely, but there is reason to believe that all of them grew out of the one simple idea which is expressed in the first example given above, namely, the idea of a straight line. It appears to be the fact that long ago, when our language was being slowly made up, the word which we have shaped finally into the spelling and pronunciation of this word RIGHT was used first to express the idea of straightness, T
he ideal and nothing else. That was 8tralglltness - a very simple idea, which men's minds took easily from their eyes. They could see straightness in many things, but it is possible that the idea of it was especially impressed upon them by the tightened strings of their bent bows; for when they first used the word straight, it meant stretched, a stretched or tightened cord, or a line of any kind from which all crookedness had been taken out, making it RIGHT.
The first use of the word RIGHT, then, by the simple-minded people who invented it, was probably to express just so much of an idea of straightness as their sight and feeling of a stretched string could convey to their minds. But afterwards, when these or some later people began to form moral ideas and needed a word to signify the good quality which they found in some of The moral their own actions, contrasted with an opposite quality in others, they seem to have felt that it was like the straightness of a stretched line, in contrast with the crookedness, the wavering and turning, of other lines; and so they called it, as they had called the straightened line, RIGHT.

CHAPTER I
RIGHT AND WRONG
Meanings of the word " right " .... 1
The idea of straightness 3
The moral meaning 4
The word " wrong " 5
A straight line 7
Why the " right line " 8
The line of Tightness ...... 10
The line of truth 11
The line of the Golden Rule .... 14
CHAPTER II
THE NATURAL IMPULSE TO DO RIGHT AND OUR FREEDOM TO OBEY OR DISOBEY IT
The physical law of motion parallel to the moral law of conduct ...... 20
Our freedom under law 22
Our freedom gives our conduct its moral quality 23
Our freedom exalts us 24
CHAPTER III
THE TRUST OF OUR MORAL FREEDOM
The destiny of man in his own hands ... 27
What might be 28
The easy gift we can make to the bettering of the world. 30
Effects on ourselves 31
The high privilege of our freedom to do right. 34
CHAPTER IV
SELF-CONTROL AND THE FORMATION OF HABIT
Forces in conflict 38
We are not puppets 40
But we can be puppet-like .... 41
Self-mastery is never impossible .... 42
Habits, and their power 44
Habit-making in childhood 45
the book details : Download 6 MB