The stranger in Ireland 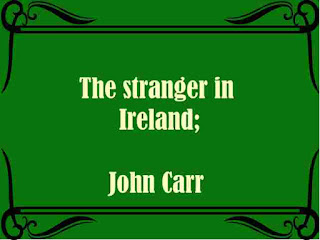 Excerpt:
In the following pages, I have endeavoured to illustrate the Irish character, and to give a descriptive narrative of a tour into the south and south-west parts of Ireland, and also some account of the present state of society, political economy, national manners, public buildings, etc of that country.
I have as much as pos- sible avoided adverting to those points upon which the public opinion has divided with temper; where I have touched them, I trust it has been with becoming defe- rence, and only when they were connected with the pa- ramount objects of humanity and general policy.
Upon those unsettled subjects which have too long excited party animosity, I have advanced nothing which can have the remotest tendency to inflame the public mind, Where time and opportunity did not enable me personally to judge,
I have had the advantage of corres- ponding with some of the ablest, impartial, and distinguished persons of Ireland, and Englishmen resident there.
If I had not been encouraged by a liberal public and prompted to the undertaking by several enlightened friends, I would not have engaged in the work: if with these advantages I have failed, the fault is my own, for the character which I have attempted to portray is too frank to conceal even its own failings.

CHAPTER I.
page Two Englishmen in India : the Irish hair-dresser and his wig: the favourite owl: a singular character: a disappointment: first bull: the vale of Llangollen: a sketch of the Welsh: pedigree: amatory indulgences: blind Bet: Gelert's grave: holy jumpers: Anglesea: a warning: a seasonable relief - 1
CHAPTER II.
The bay of Dublin described: the mole: prize pork: an English agri- cultural bull: Irish vis-a-vis: ancient history of Ireland omitted: nations, like individuals, proud of ancient genealogy: the fountain: street sounds : jingles: a car: a noddy: the important accelerating and retarding words gee and ivoo discussed: a raw: Dublin beggars: the black cart: mendicant wit:- dress of the low Irish - 17
CHAPTER III.
A brief account of Dublin: its progressive improvement: parishes : Jews: defective state of its ecclesiastical establishment: its population: the
- family Bible: a necessary weapon for a traveller in Ireland: newspaper murders: state of the quarters of the poor: affecting picture: Irish philanthropy: the glove shop: deplorable state of the coin: absentees: distressing anecdotes: high state of exchange: attempt to develop its cause: a few suggestions offered for its removal 28
CHAPTER IV.
The late parliament-house: directors of the bank: old Croaker: for- me Irish house of commons and legislative assembly compared: female auditors: English house of commons: French orators: in- fluence of a large audience on parliamentary orators: patrician eloquence and the garden-pot; Barry the painter: packets: -mail-
book details : Download 19 MB - PDF ebook