The idea of God in the light of recent philosophy 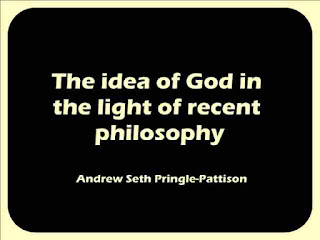 In the present case, when contemporary discussion on the fundamental questions of philosophy and religion is peculiarly active, the necessity is almost imposed upon a writer of defining his own position by reference to divergent views and other forms of statement.
And I venture to think that the value of his work is thereby increased; for only by such mutual criticism, and the resulting definition of the points of difference, can we advance towards a common understanding.
Readers of this volume will note the prominence given to Professor Bosanquet's impressive statement of the Idealistic position in the two volumes of his Gifford Lectures in the University of Edinburgh. I found it especially instructive, from time to time, to make Professor Bosanquet's treatment my point of departure, because, along with a large amount of general agreement, there was at certain points a difference of emphasis, to say the least, in our ways of holding the Idealistic creed.
The lecture on ' The Criterion of Value ' and the two lectures on ' The Absolute and the Finite Individual ' may be mentioned as examples of what I mean. It is possible that some readers may think that I have drawn too frequently upon the poets. That is perhaps a question of temperament. But my procedure was, at any rate, quite deliberate, for I accept Wordsworth's description of poetry as ' the breath and finer spirit of all knowledge ', and I am even ready to be persuaded by Mr Yeats that ' whatever of philosophy has been made poetry is alone permanent ',
In concluding this preface, I desire to thank the Senatus of the University of Aberdeen for the honour they did me in appointing me to the Lectureship. It has enabled me to bring together the reflections of many years, and I have striven, in return, to give them my best. To my brother, Professor James Seth, who read the lectures in manuscript, and to Professor H. R. Mackintosh, of New College, Edinburgh, and Mr H. F. Hallett, M.A., who read the whole in proof, my warm thanks are also due for their ready help and valuable suggestions. University of Edinburgh, December 20, 1916.
The reception accorded to these Lectures encourages me to hope that the book may continue to be found of service for some time. The call for a new edition has come while publishers are still hampered by difficulties of production and by the accumulations of the war. In these circum- stances, it has been decided to print the present edition from the plates of the American edition issued in 1917. This has made it impossible to introduce into the text more than verbal corrections, but I have been able to add, by way of the appendix, a few supplementary notes referring to the more important criticisms and discussions to which the volume has given rise. Any attempt at mediation in a difficult dispute is necessarily exposed to attack from both sides, and this has happened to my attempt, in the second series of Lectures, to balance the claims of the Absolute and the individual or of monism and pluralism. But I have met with nothing to shake my confidence in the fundamental positions and lines of argument to which I had committed myself.

FIRST SERIES
LECTURE I
HUME'S ' DIALOGUES CONCERNING NATURAL RELIGION '
Reasons for beginning with Hume I
The importance attached to the ' Dialogues ' by Hume himself 2
The question debated is not ' the Being but only the Nature of the Deity' .... 6
Demea's attempt to base religious faith on philosophical scepticism . . . . . . .7
The a priori argument dismissed .... . . 8
The concentration of the discussion on the argument from design 9
The criticisms of Philo and his anticipation of modern points of view ... ... II
Hume's tenacious adherence to the ' speculative tenet of theism ' . . . . 14
The contrast between the order of nature and the record of human history 16
The hypothesis of a finite God suggested but set aside .... 19
Surrender of the moral attributes 20
The insignificant character of the conclusion 21
LECTURE II
KANT AND THE IDEA OF INTRINSIC VALUE
Hume's conclusion determined by the restricted nature of his premisses .... 24
Kant's analysis of moral experience . . . 26
The idea of value or worth: the goodwill . ... 27
' A realm of ends ': teleological view of the world of nature. 28
The ' postulates ' of God and immortality . . 31
Defects of Kant's statement ... -34
The doctrine of the self-legislative will ... 36
The idea of value in Kant's successors and throughout the nineteenth century 38
book details : Download The idea of God in the light of recent philosophy PDF ebook 10 MB.