The art of self-control 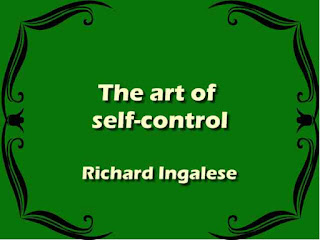 This short book illustrates the importance of self-control and self-mastery.
One of the reputed wisest men that ever lived said: “He that is slow to anger is better than the mighty, and he that ruleth his spirit than he that taketh a city.” Of course, I refer to Solomon. This lecture on “The Art of Self-Control” might be said to be an amplification of that utterance of Solomon. I am free to admit that it is much easier to talk about self-control than it is to practice it, but, nevertheless, there are certain ways whereby we can, in a measure, exercise self-control.
The fact that Solomon made the remark quoted does not appeal to one particularly unless one can see the reason for so acting. There are persons who, if they read in the Scriptures that certain things should be done, will do them because the Scriptures command them to be done. And there are persons who will do things because their parents or someone whom they love or honour says such a thing should be done.
In such cases, the effort is but a perfunctory one, unless a reason for so acting be given, and very little good comes of the obedience to the command under either of those circumstances. Let us see if there is a reason for Solomon’s aphorism.
It goes without saying that no one can be truly great who has not the power of self-control. It does not matter how many virtues a man may have, if he al- lows himself to give way to paroxysms of anger and loses his self-control at critical moments, his greatness becomes largely diminished; neither can he become really successful in any chosen field or line of work unless he has first developed self-control.
Napoleon said if he could keep his anger below his chin he could control men. In other words, when his emotions became dominant then self-control was lost and when he lost control of himself he had no power to control others. Grant’s great strength lay in his power of self-control at critical moments. George Dewey destroyed . the Spanish Fleet quickly and completely because he controlled himself first and afterwards his men.
His command to his Captain was: “When you are ready, Gridley, you may fire.” Imagine, if you can, a statesman who has not developed this art of self-control and you will find that at the moment he needs self-mastery most it utterly deserts him. Imagine one of the great financiers of this country not having sufficient control over his tongue to keep his plans secret, and how long would he be a factor in the world of finance?
book details : Download The art of self-control