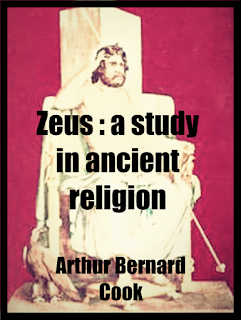 Arthur Bernard Cook was a British archaeologist and classical scholar, best known for his three-part work, Zeus: A Study in Ancient Religion
Zeus was the most powerful of the Greek gods and had a number of powers. His most famous power is the ability to throw lightning bolts. His winged horse Pegasus carried his lightning bolts and he trained an eagle to retrieve them. He could also control the weather causing rain and huge storms.
Contents of the book

Chrysostomos is a memorable sentence that declared Zeus to be 'the giver of all good things, the Father, the Saviour, the Keeper of mankind.' On the lower levels and slopes of this splendid spiritual ascent, the Greeks found themselves at one with the beliefs of many surrounding peoples so that a fusion of the Hellenic Zeus with this or that barbaric counterpart often came about. On the higher ground of philosophy and poetry, they joined hands with a later age and pressed on towards our own conceptions of Deity.

I have therefore felt bound to take into account not only the numerous adaptations of Levantine syncretism but also sundry points of contact between Hellenism and Christianity. It is obvious that the limits of such an inquiry are to a certain extent arbitrary. I shall expect to be told by some that I have gone too far afield, by others that I have failed to note many side-lights from adjacent regions. Very possibly both criticisms are true.
Indeed, given the subject, it is not altogether easy to determine the best method of handling it. As a matter of fact, I have tried more ways than one. In the Classical Review for 1903 and 1904, I published a series of six papers on 'Zeus, Jupiter and the Oak/ which aimed at summarising the Greek and Roman evidence that might be adduced in support of Sir James G. Frazer's Arian hypothesis. Satisfied that the evidence was much stronger than I had at first supposed, I next attempted, rashly enough, to pursue the same theme into the Celtic, the Germanic, and the Letto- Slavonic areas. With that intent, I wrote another series of eight articles on 'The European Sky-God,' which appeared in Folk-Lore between the years 1904 and 1907.


Of these articles the first three restated, with some modifications, the results obtained on Graeco- Italic ground; and the remaining five were devoted to a survey of analogous phenomena among the Insular Celts. I had meant to go further along the same road. But at this point, Dr Famell in the friendliest fashion put a spoke in my wheel by convincing me that the unity of an ancient god consisted less in his nature than in his name.
Thereupon I decided to abandon my search for ' The European Sky-God ', and I did so the more readily because I had felt with increasing pressure the difficulty of discussing customs and myths without real knowledge of the languages in which they were recorded. After some hesitation I resolved to start afresh on narrower lines, restricting inquiry to the single case of Zeus and marking out my province as explained in the previous paragraph. Even so, the subject has proved to be almost too wide.


Download 59 MB PDF book .for big files, it is advisable to read on your computer.