The Russian diary of an Englishman 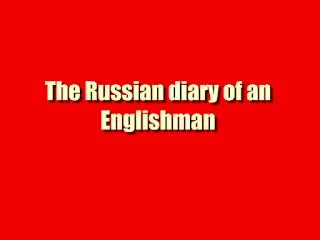 Excerpt:
At the date when this Diary opens the Great European War had been raging for just upon a twelvemonth. But for Russia, there were perils within as well as without. Those who had eyes to see knew that the long-drawn drama of the Tsardom was swiftly approaching its climax. The Diarist's notes reflect the shifting moods of hope, of levity, of doubt, of foreboding, by which in turn the public mind was swayed, and vividly reveal the ever-downward course of events towards the destined abyss of dissolution.
The situation, as he sadly says, is always " going from worse to worst "; he sees the whole social fabric already menaced with annihilation, and he quits Russia at the moment when the Bolshevik volcano is being up to its fiery finale. The political system of Russia was once aptly described as Absolutism tempered by Assassination. Several of the earlier Romanovs died violent deaths; while of the three latest Emperors two have been murdered, the third escaping a like fate more often and more narrowly than the world ever knew.
The fight between Autocracy and Assassination has been long and obstinate. From the time of the fourth Romanov ruler, Peter the Great, down to the very end of the dynasty — a period of two hundred years — Prussian influence dominated the Court and Government of Petrograd, the absolutist regime in Russia borrowing its distinctive colour from that Prussian variety of which Frederick the Great and his grim father are the typical representatives. For the last century and a half every Russian Emperor, without exception, has married a German wife; in each generation, the spirit of Prussianism has been reinforced by the introduction of a fresh German princess to become the spouse of one Emperor and the parent of another. German female ambition, soaring higher still, actually captured supreme power when in 1762 Paul Ill's widow, a princess of Anhalt-Zerbst, became Autocrat of All the Russias as Empress Catherine 11. To exhibit the bearing on recent events of that weird episode in Muscovite history as a cherished tradition and a possible exemplar is to shed light on some of the most suggestive passages in the Diary before us.
The ten years anterior to 191 5 witnessed an unceasing struggle for the mastery between the old Absolutism and various movements for liberalising the form of government. In 1905 the Russian hereditary monarchy professed itself " constitutional," but the regime remained in practice largely autocratic. The Duma of August 1905 was a purely consultative body to which, however, under a new law of October, was accorded legislative power; an upper House being fashioned out of the old Council of the Empire. That first Duma was dissolved in 1906, its successor in 1907; the next lived till 191 2, and the fourth proved to be the last. Throughout this whole period, the Emperor's best advisers were advocating concessions in the interests alike of the people and of the Throne itself; while the Germanophil party, in alliance with the Empress, offered uncompromising resistance to every measure for limiting autocratic power.
Download