My escape from Donington Hall, 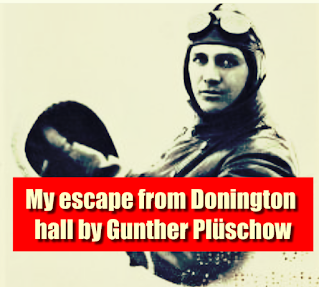 his escape is the only POW to ever escape from England.
Gunther Plüschow was a German aviator, aerial explorer and author from Munich, Bavaria. His feats include the only escape by a German prisoner of war in World War I from Britain back to Germany; he was the first man to explore and film Tierra del Fuego and Patagonia from the air.
Excerpt:
It was in the month of August of the year 1913 when I arrived in my native town, Schwerin. I had stayed several weeks in England, where I had devoted days to the visit of museums and the beautiful art collections, as well as to excursions in the vicinity of the capital. At that time I did not foresee how useful the latter would prove to me two years hence.
During the whole journey, I was labouring under an inner excitement and disquiet which I could not throw off, and when I arrived in Schwerin one question only burned on my lips, and yet I did not dare put it to my uncle who fetched me from the station. For the new Naval List of autumn promotions and appointments might be issued any day, and I was on the tiptoe of expectation as to whether the wish I had cherished for years was, at last, to be gratified. My uncle's question: "
Do you know where they've put you ? " gave me an electric shock. "No." " Well, then, hearty congratulations — Naval Flying Corps! " I was so overjoyed that I would like to have turned a somersault in the middle of the street, but I refrained from fear of upsetting my fellow citizens. So I had got my wish after all! The last days of my leave passed in a flash, and I gaily returned to the Naval College in order to complete my course of a year and a half as Inspecting Officer, but I never packed my trunks with greater pleasure than when bound for my new destination.
Download