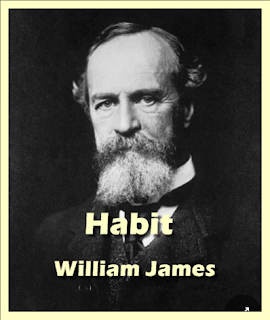 This book contains a life changing fact, which is we are slaves to our habits, though it is hard to break the chain of habits, but with exercise and volition, we can aquire new habits that leads us to success.
Excerpt:
When we look at living creatures from an outward point of view, one of the first things that strike us is that they are bundles of habits. In wild animals, the usual round of daily behaviour seems a necessity implanted at birth in animals domesticated, and especially in man, it seems, to a great extent, to be the result of education.
The habits to which there is an innate tendency are called instincts; some of those due to education would by most persons be called acts of reason. It thus appears that habit covers a very large part of life, and that one engaged in studying the objective manifestations of mind is 1 This chapter has already appeared in the Popular Science Monthly for February 1887 bound at the very outset to define clearly just what its limits are.
The moment one tries to define what habit is, one is led to the fundamental properties of matter. The laws of Nature are nothing but the immutable habits which the different elementary sorts of matter follow in their actions and reactions upon each other. In the organic world, however, the habits are more variable than this. Even instincts vary from one individual to another of a kind; and are modified in the same individual, as we shall later see, to suit the exigencies of the case.
The habits of an elementary particle of matter cannot change (on the principles of the atomistic philosophy), because the particle is itself an unchangeable thing; but those of a compound mass of matter can change, because they are in the last instance due to the structure of the compound, and either outward forces or inward tensions can,  from one hour to another, turn that structure into something different from what it was.
That is, they can do so if the body be plastic enough to maintain its integrity, and be not disrupted when its structure yields. The change of structure here spoken of need not involve the outward shape; it may be invisi- ble and molecular, as when a bar of iron becomes magnetic or crystalline through the action of certain outward causes, or India-rubber becomes friable, or plaster 'sets.' All these changes are rather slow; the material in question opposes a certain resistance to the modifying cause, which it takes time to overcome, but the gradual yielding whereof often saves the material from being disintegrated altogether. When the structure has yielded, the same inertia becomes a condition of its comparative permanence in the new form, and of the new habits the body then manifests.
Download