An introduction to poetry 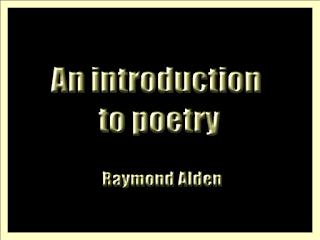 This book is to some extent a result of the kind reception accorded English Verse, a volume of annotated selections, illustrating the principles and history of English versification, which appeared about six years ago. Some who have made use of that book have felt the need of a treatise which should undertake to give a more extended account of matters of which the plan of the earlier volume allowed only brief mention in notes. And when it came to the point of preparing such a treatise, it seemed likely that similar needs would be served by including some account of the elements of poetry other than versification, so far as students of English literature have to analyze them.
The present volume, then, differs from English Verse in three principal ways: it is more frankly dogmatic, attempting to state principles with some fullness instead of merely bringing together the materials for the inductive study of the subject; it includes a discussion of the imaginative and spiritual aspects of poetry, instead of limiting itself to verse form; and it omits altogether the historical treatment of the material, except where this is necessarily involved in clearness of definition.
Download 7.2 MB PDF book