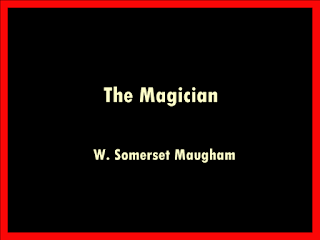 Arthur Burdon, a renowned English surgeon, is visiting Paris to see his fiancée, Margaret Dauncey. Margaret is studying art in a Parisian school, along with her friend Susie Boyd. On his first evening in Paris, Burdon meets Oliver Haddo, who claims to be a magician and is an acquaintance of Burdon's mentor, the retired doctor and occult scholar Dr Porhoët.
While none of the company initially believe Haddo's claims, Haddo performs several feats of magic for them over the following days. Arthur eventually fights with Haddo, after the magician kicks Margaret's dog. In revenge, Haddo uses both his personality and his magic to seduce Margaret, despite her initial revulsion towards him.