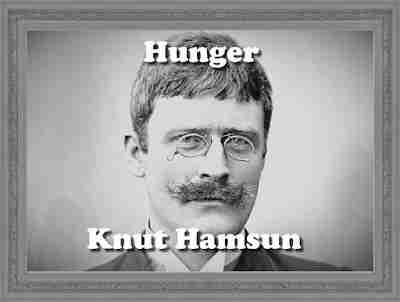 This very unusual and notable book . . . the product of most remarkable imagination, so real is it, so vivid, so moving, so compelling in its claims upon the reader's emotions and sympathies."
New York Times.
Autobiographical novel recounting the abject poverty, hunger, and despair of a young writer struggling to achieve self-discovery and its ultimate artistic expression. The book brilliantly probes the psychodynamics of alienation, obsession, and self-destruction, painting an unforgettable portrait of a man driven by forces beyond his control to the edge of the abyss.his powerful work of writing by Knut Hamsun, clearly lets you think what the state of ‘hunger’ can do to a human being.

Excerpt from the preface by George Egerton

Ten years ago a little book on " Intellectual Life in the America of Today" appeared in Norway. The intense individuality of its (it must be admitted often wrong-headed) point of view aroused interest and curiosity as to its author. It was followed shortly by his first novel "Suit" ("Hunger"). It made a great sensation; was as the flash of some strange meteor, holding perhaps a menace to social life, across the firmament. It met with much adverse criticism; indeed, it demanded some courage in those days to declare oneself an admirer of " that dreadful Hamsun! "
There was something mysterious, challenging something alike magnetic and repellent, in the man's personality, as in his work; something that invoked opposition. He was an unknown quantity in the society and literature of his country. " Hunger " was followed by a course of lectures, in which he beheaded the literary idols of the day (not a few were amongst his audience), executed them with an audacious, genial impudence, an irritating self-assurance, that made his addresses the sensation of the year. One book after the other appeared " Mysteries " (Mysteries), " Pan," "Redaktor Lynge," " Nyjord " (Fresh Soil), " Siesta " (short stories), and the critics scourged him alternately as poseur and blageur, poet and genius, creative artist and impudent imitator. Hamsun went his own way, with a genial laugh at his critics, as a schoolboy caught at some trick.
This son of the people, this self-taught man, whose art was congenital a growth of his very innermost being, not a graft from outside had a superb contempt for everything that was not of aesthetic value in his own eyes. Of one thing he convinced them that, as a stylist, he was second to none in his own country. Consciously or unconsciously, every young writer in Norway owes Hamsun a debt. He introduced an absolutely new note into his native language, established a new scale of word values, pointed to fresh uses for the older one.
The effect was startling, as one of his critics aptly said: " Hamsun had brought something \ American ' into the language a lightning smartness, an audacious  trick of phrase, troll-like humour hitherto unknown." In a word, he leavened the heaviness in some marvellous way; it was as if the spirit of Mark Twain had suddenly obsessed the sober discourse of a meeting of serious elders. Words were gold in his hands, to be tossed about rough as unwashed nuggets, or beaten into a delicate, fantastic filigree; language became a plastic material, capable of expressing the most elusive half-thoughts, the most unrecorded emotions.
No translation can give any idea of the magic of his word -treatment; it has to be sacrificed to a bald rendering of the spirit of the original. Each of his books was attention-compelling, baffling the critics to define his exact place as a writer. Perhaps Hamsun himself was only seeking; as yet a sort of literary freebooter, fighting a place for his individual art through the ranks of conservative prejudice. There was a trace of struggle in much of his work; his method was peculiar, and his personality jumped up and down through all his books in many disguises.
It tantalized whilst it compelled to laughter, whether as brilliant jester who held all things up to ridicule or fantastic viii Prefatory Note juggler tossing up the old-world values as ii they were jingling balls of no particular worth; who could pause suddenly, casting aside his motley, to scourge his listeners with a sermon on the " superstitions " of the day, with truly sardonic humour.
No one, nothing escaped him; he pilloried Gladstone as gaily as Carl Marx; " Novelist Maupassant " as " Missionary Tolstoy." Sometimes one had to shut the book, with flaming cheeks, as one was met by an episode so coarse, a jest so unseemly, a blasphemy so surprising as only a wanton irresponsible peasant lad could tell it; but one opened it again to discover an exquisite lyrical word-painting of some mood in nature or emotion in man, that made one's heart warm and one's eyes wet. Hamsun has proved himself a master at probing into the unexplored crannies in the human soul, the mysterious territory of uncontrollable, half-conscious impulses. He has no consideration for the weak places in humanity: he is merciless in his exposure of dark places of all that borders on the abnormal, the insane It takes a strong will and sound intellect, and an iron tenacity of purpose to psychologize in Hamsun's manner.
Publication date:, 1899
Download Hunger PDF novel 6.5 MB PDF