The quatrains of Abu'l-Ala; (1904) PDF book translated by Ameen Rihani 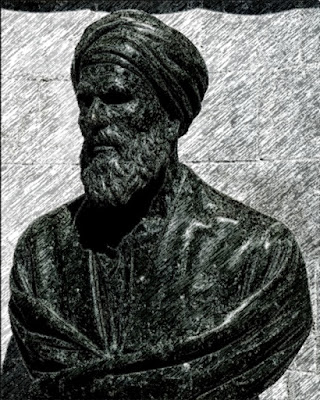 When all Europe was arming itself for the first crusade, when the Northmen were ravaging the western world with their marauding expeditions, when the Califs were engaged in a bloody battle with their rebellious subjects, Abu'1-Ala was waging his silent and the bloodless war on the follies and evils of his age.

He attacked the superstitions and the false traditions of religions, and proclaimed the supremacy of the mind; he hurled his trenchant invectives at the tyranny and despotism of rulers, and asserted the supremacy of the human soul; he stood for perfect equality, and fought against the fallacies, the shams and the lies of the ruling class of his time, in its social, religious and political aspects. This man lived in the latter part of the tenth and the first half of the eleventh centuries, and the European world of knowledge has succeeded in ignoring him for the nine centuries that followed. Nothing is so remarkable as the slight mention of him, even by Arabic writers and historians.

Abū al-ʿAlāʾ al-Maʿarrī was a blind Arab philosopher, poet, and writer. Despite holding a controversially irreligious worldview, he is regarded as one of the greatest classical Arabic poets. Born in the city of Ma'arra during the Abbasid era, he studied in nearby Aleppo, then in Tripoli and Antioch