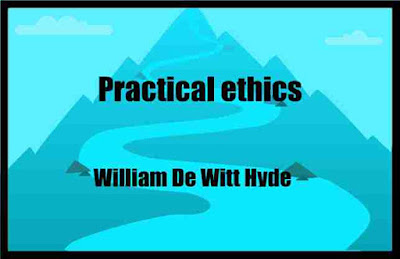 The steady stream of works on ethics during the last ten years, rising almost to a torrent within the past few months, renders it necessary for even the tiniest rill to justify its slender contribution to the already swollen flood.
On the one hand, treatises abound which are exhaustive in their presentation of ethical theory. On the other hand, other books are plentythat give good moral advice with great elaborateness of detail. Each type of work has its place and function. The one is excellent mental gymnastics for the mature; the other admirable emotional pabulum for the childish mind. Neither, however, is adapted both to satisfy the intellect and quicken the conscience at that critical period when the youth has put away childish things and is reaching out after manly and womanly ideals.
The book which shall meet this won't have a theory, yet the theory must not be made obtrusive, nor stated too abstractly. The theory must be deeply embedded in the structure of the work; and must commend itself, not by metaphysical deduction from first principles, but by its ability to comprehend in a rational and intelligible order the con- crete facts with which conduct has to do. Such a book must be direct and practical. It must contain the clear-cut presentation of duties to be done, virtues to be cultivated, temptations to be overcome, and vices to be shunned: yet this must be done, not by preaching and exhortation, but by showing the place these things occupy in a coherent system of reasoned knowledge. Such a blending of theory and practice, of faith and works, is the aim and purpose of this book.
The only explicit suggestions of the theory are in the 'introduction (which should not be taken as the first lesson) and in the last two chapters. Religion is presented as the consummation, rather than the foundation of ethics; and the brief sketch of religion in the concluding chapter is confined to those broad outlines which are accepted, with more or less explicitness, by Jew and Christian, Catholic and Protestant, Orthodox and Liberal.
Ethics is the science of conduct and the art of life. Life consists in the maintenance of relations; it requires continual adjustment; it implies external objects, as well as internal forces. The conduct must-have materials to work with; stuff to build a character out of; resistance to overcome; objects to confront. These objects nature has abundantly provided.
They are countless as the sands of the seashore, or the stars of heaven. In order to bring them within the range of scientific treatment, we must classify them, and select for study those classes of objects which are most essential to life and conduct. Each chapter of this book presents one of these fundamental objects with which life and conduct are im- mediately concerned.
A great many different relations are possible be- tween ourselves and each one of these objects. Of these many possible relations, some would be injurious to ourselves; some would be destructive of the object. Toward each object, there is one relation, and one only, which at the same time best promotes
the development of ourselves and best preserves the object's proper use and worth.
The maintenance of this ideal union of self and object is our duty with reference to that object. Which shall come first and count most in determining this right relation, self or object depends on the character of the object. In the case of inanimate objects, such as food, drink, dress, and property, the interests of the self are supreme. Toward these things, it is our right and duty to be sagaciously and supremely selfish. When persons and mere things meet, persons have absolute right of way. When we come to ideal objects, such as knowledge, art, Nature, this cool selfishness is out of place.
The attempt to cram knowledge, appropriate nature, and "get up'' art, defeats itself. These objects have worth in themselves, and rights of their own which we must respect. They resent our attempts to bring them into subjection to ourselves.
We must surrender to them, we must take the attitude of humble and self-forgetful suitors if we would win the best gifts they have to give and claim them as our own. As we rise to personal relations, neither appropriation nor surrender, neither egoism nor altruism, nor indeed any precisely measured mechanical mixture of the two, will solve the problem.
the book details : Download 3.8 MB