Despotism: or, The last days of the American republic 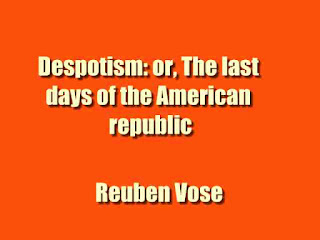 from the introduction:
In May 1856, I was walking leisurely toward the battery. A gentle breeze came from the west — the full moon was directly over my head, and the light was almost the splendour of a cloudless day. I sought the spot where once the stairs were placed on which the stranger steps as he lands on our soil. I found the place and stood mute as I gazed in astonishment at all around me.
What a change! was the exclamation that escaped from my lips! Here, where I now stand, Washington once stood! An eminent poet has said that the spirit of Poetry if the goddess ever visits the earth in a visible form, would here hold her court.

Alas, he did not know what wicked aldermen could do! The evening previous I had called with a friend at the house at which a spiritual medium had arrived, and a few believers had called to congratulate the empiric. To exhibit his powers as a revealing medium, he gave conversations with Bacon, Washington, Franklin, Clinton, Webster, and others; and he asked me to converse with my lost friends through his agency. I proposed various questions to my departed relatives, and the answers astonished me! What can be the secret of this power? I must reflect on this deep mystery!
With this unaccountable phenomenon, I was struggling to make some progress. I wished to comprehend some letters in their alphabet. I would reach the vestibule if I could not look into the magician's heathen temple.