The journal of a spy in Paris 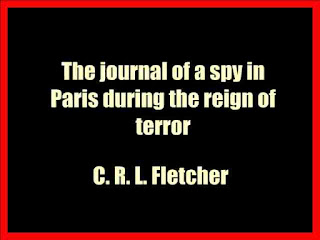 Reign of Terror: A period of violence during the French Revolution incited by conflict between two rival political factions, the Girondins and the Jacobins, and marked by mass executions of “the enemies of the revolution.” The death toll ranged in the tens of thousands, with 16,594 executed by guillotine and another

The following fragment appears to be part of the journal of an English spy in Paris, kept during the terrible months of January to July 1794. " Raoul Hesdin," the name is written upon the brown paper, the cover of the book is apparently a mere blind. So is the title, Quelques Observations Sur Les Industries, etc.

No such person as " Hesdin " can be traced among the employees of the French Government at the time, but there was an enormous number of persons serving the Committee of Public Safety in various capacities whom it would be how equally impossible to identify. Internal evidence may, indeed, supply many suggestions as to what kind of man he was, and as to his course of life, both in Paris and previously.
He appears to have been trained as a wood-engraver in France in his youth, to have been at one time in North America, and possibly also in Germany; to have been thoroughly familiar with Paris under the ancient regime; to have been present at many of the earlier scenes of the Revolution, especially in 1789 and 1790 — he may even have seen and spoken with Arthur Young on his famous tour in the former year — and to have returned to Paris late in the year 1793, but whether from England or America seems doubtful.

December 1793
The injustice of the Maximum — Dialogue on it with a Stone-mason — Gloomy Prospects of the Vendean Insurrection — The Allies have neglected La Vendee —State of the Church of St. Sulpice and of St. Denys — Old Methods of Embalming — Certificates of Good Citizenship — Municipal and Official Vanity — The Ladies and the Cockade i
January 1794
Question of Public Bake-shops — A City on Rations — The "Queues" — Use of Napkins compulsory — Iniquity of Management by Police — Scuffling for Coals and Wood — Shoes for the Army, which hates the Government — Hesdin's Work-room at the Tuileries — The System of Couriers of Government — The Emigres are hard up for Money — La Vendee neglected — David, the Painter — Revolutionary En-^ gravings — The Cap of Liberty — Evasions of the Tariff Law- — Origin of "Strikes" — King George ridiculed on the Stage — Talma, the Actor — Gam- bling-hells — P^re Duchesne — A German Prince acting as a Revolution Agent — The Name of Marseilles to be changed — " Revolutionary Principles "
February 1794
The Government has no " Secrets," except Famine — The Accapareurs — Hopelessness of Attempt to enforce Tariff — New Metrical System and Calendar —The Jacobin Club — Hesdin's Pocket picked — —Patriotic Thief— King Louis XVII. at the Temple Prison — The Sections of the Luxembourg and Pantheon ( Hesdin's own Section ) — Printing of Speeches — Change in Aspect of Streets owing to Abolition of Religion — Destruction of Churches, etc. — Nuns executed — Recruiting for the Army ; it is the only Safe Place — Cannon Foundries created — Talleyrand expelled from England — Hesdin's Judgment of him — A Strange Story from Plymouth — Death of Lomenie de Brienne — A Visit to some Pottery Works — The Revolution has done away with Honest Work, and given birth to the " Cornerman " — France will fight for Independence under any Government — Accusations of High Treason are frequent — Mild Winter — English People in Prison at St. Omer — Their Fears of Massacre — Scandalous Violations of International Law ... 28
March 1794
A Concert at the Lycee — Violation of Maximum — An Amusing Scene on the River ; another at a City Gate — Paris is a Commercial Cul-de-sac — Starva- tion — Wild Beasts multiplying — More Strikes — No Fodder — Emigres return in Disguise — Gardens to be requisitioned for Vegetable Growing — A ' ' Patri- otic" Riot — Marat's Paper to be continued — The ' ' Fall of Toulon " at the Theatre — Barire en evi- dence at the Theatre, with " Ladies " — Prices at the Theatres — Disgrace of the Stage — Immorality and Prostitution — Use of Tobacco disgusts Hesdin — ' ' Ignorance and Contempt for Refinement " — Books despised — Art at a Stand-still — The "Jury des Arts " — An Engraver's Opinion of Painters — The Hfebertists arrested — ^Wild Rumors and Proba- bility of an Insurrection to save Hebert — Absurd Travesty in the Convention — Week of Excitement over Hebert — Iniquity of his Party — Danger past, and Hubert condemned — "A Duel between the Government and the Town Council " — Execution of Hebert and his Friends — Will there be a Bank- ruptcy ? — Forged Assignats — Fouche and his Influence — State of Parties — There will be a Struggle for the Mastery 52