The bomb by Frank Harris 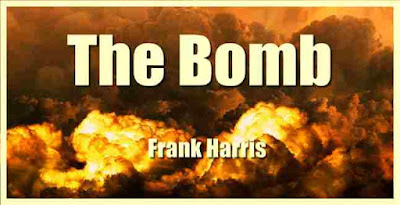 The Bomb by Frank Harris is a novelized account of the Haymarket Riot and bombing in Chicago during the 1880s. Narrated by Rudolph Schnaubelt, a real suspect in the actual event, we get a point by point account of his life and what led up to the bombing that kills 60 police officers or so.
From the author Forward:
I have been asked to write a foreword to the American edition of The bomb and the publisher tells me that what the American public will most want to know is how much of the story is true. All through 1885 and 1886, I took a lively interest in the labour disputes in Chicago.
The reports that reached us in London from American newspapers were all bitterly one-sided: they read as if some enraged capitalist had dictated them: but after the bomb was thrown and the labour leaders were brought to trial little islets of facts began to emerge from the sea of lies. I made up my mind that if I ever got the opportunity I would look into the matter and see whether the Socialists who had been sent to death deserved the punishment meted out to them amid the jubilation of the capitalistic press. In 1907 paid a visit to America and spent some time in Chicago visiting the various scenes and studying the contemporary newspaper ac- counts of the tragedy
. I came to the conclusion that six out of seven men punished in Chicago were as innocent as I was, and that four of them had been murdered — according to law. I felt so strongly on the subject that when I sketched out The bomb determined not to alter a single incident but to take all the facts just as they occurred. The look then, in the most important particulars, is history, and is true, as history should be true, to life, when there are no facts to go upon. The success of the look in England has leen due partly perhaps to the book itself; but also in part to the fact that it enabled Englishmen to gloat over a fancied superiority to Americans in the administration of justice.
The prejudice is shown in Chicago, the gross unfairness of the trial, the savagery of the sentences allowed Englishmen to believe that such judicial murders were only possible in Ameri- ca. I am not of that opinion. At the risk of disturbing the comfortable self-esteem of my compatriots, I must say that I believe the administration of justice in the United States is at least as fair and certainly more humane than it is in England.
The Socialists in Trafalgar Square when John Burns and Cunninghame Graham were maltreated, were even worse handled in proportion to their resistance than their fellows in Chicago. I am afraid the moral of the story is a little too obvious: it may, however, serve to remind the American people how valuable are some of the foreign elements which go to make up their complex civilization. It may also incidentally remind the reader of the value of sympathy with ideas which he perhaps dislikes.