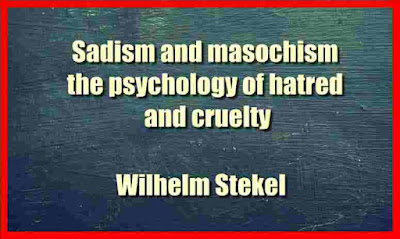 the psychology of hatred and cruelty

Sadism and masochism discusses the nature of the abnormal instinct and its many manifestations and gives the reader an authoritative explanation of the various impulses, their actions and reactions, together with a careful description of their effects on society and morals. The author amplifies his conclusion with full accounts of case histories.
It is the opinion not only of psycho-analysts but of the most eminent neurologists and students of human conduct the world over that Dr StekeFs great studies analyse the instincts and emotions, particularly of sex, more thoroughly and with greater simplicity and insight than any other work that has ever been written.
His work on disorders of the instincts and the emotions, to which belongs Sadism and Masochism, brings to the attention of the English reading public the most important work of its kind that has appeared since Krafft-Ebing's Psychopathia-Sexual. Havelock Ellis' important series, Studies in the Psychology of Sex, and the works of Freud, Moll and Bloch.
This work is intended primarily to furnish practitioners with a reliable guide through the difficult realm of instincts and emotions, their disorders and rational psychotherapy. StekeFs technique is not limited to orthodox psychoanalysis. It follows for the most part along original lines, utilising the elements of other schools of thought.
From introduction:
In looking over this work which now appears in a new English edition, I have asked myself, how much farther the research into the origin of sadomasochism has carried since its first appearance in its German original.
With a feeling of regret, I must admit that very little additional insight has been secured and that current psychology has not penetrated deeper than the pioneers did, a quarter of a century ago. Stekel's theory of bipolarity of all psychic phenomena, so important for the understanding of the sadomasochistic deviation; his stipulation that hate and aggression, as primal reactions to forces impeding the individual's narcissistic pleasure demands, are "older" than reactions of love, and many other fundamental truths gathered by way of ingenious clinical observations, have not been challenged successfully or replaced by more conclusive theories.
Yet one feels that more is to be said about the ultimate causes of sadomasochism. Stekel himself admits the incompleteness of his data; however, at the same time, he does something which prevents his work from ever becoming obsolete; he reports in detail, and with extraordinary clarity, sixty-four case histories reflecting the clinical problems involved. Coming generations are thus enabled to carry on his work, and to increase the amount of validated information, on the basis of his clinical data.
The case histories presented in this book support the author's main thesis that sadomasochism is a disturbance of the psycho-sexual development of the individual. According to this view, patients suffering from this type of disorder have a predominantly "retrospective" orientation which forces them to relive again and again certain conflict situations of their early lives, by the use of symbolizations, projections, condensations, role exchanges, and the like.
While analyzing the problems of the individual, Stekel never omits remarks pertaining to the society which begets this type of individual. Stekel wrote this book in an atmosphere of rising tension in Europe when a powerful wave of hate was about to engulf the entire world for the second time. Stekel points out man's inherent "need" to hate, the attempt of religious and other ethical movements to stem it, temporarily even absorbing parts of the cruelty involved, shows their victories and failures, and demonstrates that the neurosis (parapathy) is a compromise between life's creative and destructive forces.
As the only therapy capable of reducing the unresolved hatred found at the basis of the sadomasochistic disorder, Stekel recommends and describes ways of releasing analytically the dormant capacity of the individual to love, a capacity most of the patients presented in his book are lacking.
This work is the most complete and most thought-provoking book written on the subject of sadomasochism. It is replete with psychologic, sociologic, ethnologic, and purely clinical material. In 1953 it may be safely stated that no book on this subject can as yet replace Stekel's Sadism and masochism
Author: Wilhelm Stekel - was an Austrian physician and psychologist, who became one of Sigmund Freud's earliest followers, and was once described as "Freud's most distinguished pupil". According to Ernest Jones, "Stekel may be accorded the honour, together with Freud, of having founded the first psycho-analytic society."
Translator: Louise Brink
Publication Date:1935
Company: London: John Lane, The Bodley Head
Download Volume 1