The evolution and function of living purposive matter 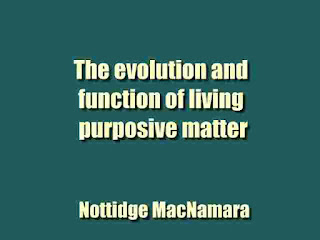 In a previous volume of the International Scientific Series, I described the fundamental properties of living protoplasm and gave an outline of the development of the sense organs of the body and the functions performed by them, in their relation to those parts of the central nervous system by which we gain ideas concerning the external worlds, and are able to express our thoughts in intelligent speech.
The object of the following work is to endeavour to explain the evolution of, and functions performed by those elements of protoplasm which are essential for the manifestation of purposive, instinctive, and psychical phenomena.
I believe that knowledge to be derived from the study of this subject is capable of helping us to realise the importance of heredity in determining the personal character of individuals, and the influence that the environment exercises in modifying the innate qualities handed down to us by our progenitors.
I hold the opinion that the protoplasm of even the simplest organism, such as that which constitutes 1 With confidence we recommend those persons who are interested in this subject to study Mr and Mrs Whetham's able and interesting work, "The Family and the Nation." the body of an amoeba, in response to various stimuli, discharges a part of its potential energy which, through the action of certain of its constituent elements, is transformed into purposive movements, or work adapted to promote the well-being of the organism.
Beyond this, there is evidence to prove that the Having substance of an amoeba retains impressions made upon it by appropriate stimuli and that these impressions may be re-excited by similar, or it may be by other, stimuli than those which produced the original impression. So that the movements of these minute particles of protoplasm are not only purposive but are to some extent guided by memory and experience.
In unicellular organisms, the purposive elements appear to be equally diffused throughout the living substance of their bodies, but in all the higher classes of beings, these elements have become differentiated, and constitute a part of the protoplasm of their ganglionic nerve cells.
These cells send out amoeboid-like processes in the form of nerve fibres which communicate with one another and form structures, the basic substance of which receives and retains impressions made upon it by appropriate stimuli, responding by the discharge of energy which becomes manifest indefinite movements of the body.
I maintain that the purposive elements of proto- plasm undergo evolution with those elements which constitute the structures and organs of the bodies of the ascending classes of animals, and trace the development of these elements through their various stages, showing that this specialised form of matter has come to occupy a definite part of the cerebrum, its functions being to elaborate the instinctive and emotional faculties displayed in the movements made by animals. I adduce evidence to prove that the psychic nervous substance of the brain has been developed from matter possessing instinctive functions.
It is through the orderly working of such a system that mental phenomena are brought into operation. In well-balanced brain energy derived from psychic nervous matter, to a large extent, controls the action of those parts of the cerebral substance by means of which inherited, instinctive, and emotional processes are elaborated, nevertheless, in the majority of human beings, these faculties exercise a paramount influence over their personal characters.
In the first part of this volume, I have given biological and anatomical evidence to demonstrate the nature of the living matter out of which the hereditary qualities possessed by individuals are elaborated. In the second part of this book, the soundness of these conclusions are put to the test, by giving the outline of the leading characteristics displayed by a long life of individuals, who have under conditions well adapted to show the power which their inherited qualities exercised on the actions of many succeeding generations, and on the destinies of the race to which they belonged. I thus emphasize the importance of heredity in determining individual character.
The object of the following work is to establish the fact, that action excited in living protoplasm by various modes of energy, is transmuted by certain of its elements into movements adapted to promote the well-being of the organism.
-
We term the elements constituting this kind of matter " purposive," and show they are sufficient to affect all the movements necessary to maintain the existence of the lower classes of living beings.^ But as in the ascending orders of animals, the structures entering into the formation of their bodies become more complicated, the purposive elements which direct their movements undergo a corresponding evolution, and become developed into matter possessing instinctive and finally psychical functions.
the book details : Download 6 MB