Here's  How To Be Healthy PDF-ebook 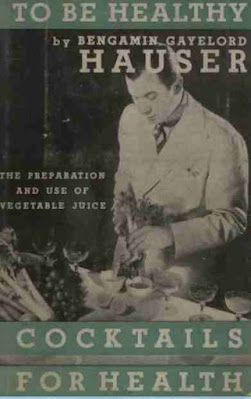 Newly discovered health realm—yes, and health abundant. Come with me; I’ll be your guide along the Trail of the Cocktail Shaker. Back in 1914, a dramatic experiment was carried on in America which for a few short but vivid weeks occupied the spotlight in the news.

Twelve convicts, six of them murder¬ ers, were promised unconditional pardons if they would volunteer for a test that would prove to science whether or not, and to what extent, a mineral-deficient diet affects health. The results were startling.

The twelve convicts, the “Poison Squad,” as the news¬ papers called them, were so affected by the mineral-deficient diet that although they knew pardon awaited them at the end of the sixty-day period, they refused after only a few days to go on with the experiment. Several of them tried to commit suicide. Two showed symptoms of pellagra, and six others actually developed the disease.
There was a great hubbub of excitement. Letters, telegrams of protest, petitions were sent to the prison officials.
And then, as a final step in the experiment, the prisoners were put on a mineral-complete ration and were soon restored to health. This experiment showed that without doubt deficiency of any one of the sixteen important mineral elements causes sickness in some form. The problem of the diet specialist is to find those foods that contain the necessary minerals in the proper proportion. These foods of high mineral content are sure to be rich in mysterious vitamins, which are essential to health. And the mineral-rich diet abounding in vitamins is sure to give increased pep and vitality.

The search of scientists for foods with these qualifications is not difficult. Dozens of fruits and vegetables from Nature’s bountiful storehouse contain these organic minerals and vitamins. Their alkaline reaction in the body offsets the acid by-products of starch and protein digestion and prevents acidosis.