Beginning right - how to succeed PDF-ebook 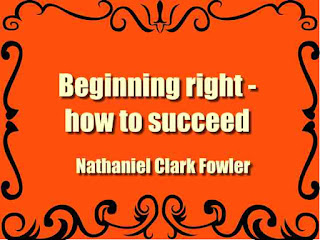 The unprecedented success of Mr Fowler's articles, which appeared under the general heading of "Getting a Start" in many of the leading newspapers of the United States and Canada, under the auspices of the McClure Newspaper Syndicate, suggested the publication of a number of them in book form.

The book, under the title of "Getting a Start," was published by us last year. It was immediately received with favour by the public and the press, and the reviewers were unanimous in their commendation. Not only has its sales been large and general, but business and professional men and educators have recommended it so highly that many copies have been purchased by employers for distribution among their employees.

The articles are considered the best inspirational short talks ever written or published. In order to fill a popular and ever-increasing demand, we have selected from the original two hundred and fifty articles a sufficient number to make up this second book. Each book is complete in itself, but, as there is no duplication, it is suggested that those who have enjoyed one, procure the other.