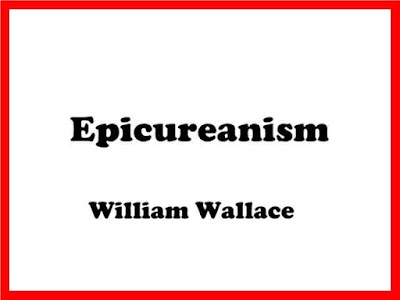 From introduction:
When the Roman emperor, Marcus Aurelius, to-wards the close of the second century of our era, resolved to give Imperial sanction to the higher teaching of the Roman world by the state endowment of a philosophical professoriate, he found four schools or sects dividing the public favour and drawing in their several directions the best thought of the time.
These schools were the school of Plato, known as the Academic; the school of Aristotle, known as the Peripatetic; the school of Zeno, known as the Stoic; and the school of Epicurus, known as the Epicurean. It was not without a cause that the fourth school continued to be known by the name of its founder, which it did not exchange like the others for an epithet drawn from some favourite locality. To the very close of its career the Epicurean sect clung reverently and lovingly to the person of the master, to whom, with one accord, his followers at- tributed their escape from the thraldom of superstition ^nd of unworthy fears and desires.
The member of another school might assert towards his teachers a> certain impartiality of critical examination. If Plato and Socrates were dear to the Platonists, the truth was dearer still. But to the Epicurean, the belief in his characteristic doctrines was blended with, and humanized by, attachment to the memory of the founder of his creed. Of the four schools, two were more ancient than the others.
The Academics and the Peripatetics preceded the Stoics and Epicureans by more than half a century; they continued to e.xist and flourish long after the younger sects had died away into silence. But during the four centuries which witnessed the rise and spread of Epicurean and Stoical doctrines, from b.c. 250 to a.d. 150, the two other schools were forced into the background and abandoned by all but a few professed students. In the Roman world, the Stoic and Epicurean systems divided themselves the suffrages of almost all who cared to think at all. Plato and Aristotle were almost unknown, for the two schools that professed to draw their original inspiration from these masters had rapidly drifted away from the de- finite doctrine of their leaders.
The doctrine both of Plato and of Aristotle had been of a kind which, in modern times, we should term Idealism. It had been sustained by enthusiasm for knowledge and carried on by a great wave of intellectual energy. Plato and Aristotle gathered the ripe fruit from that Athenian garden where Pericles, Phidias, and Sophocles had visibly signified the spring-time of blossom and brightness. Strong in the accumulated strength of a century of Athenian power and splendour, they raised their eyes fearlessly upon the world and tried to discover its plan and meaning as the home of humanity — the humanity which they saw around them and felt within them.
They endeavoured to trace the steps in the long ladder of means and ends, which, from the analogy of what they saw in their types of human society, they believed would also be found in the natural world. They looked upon everything in nature and in humanity as the realization of an idea, as a stage in the unfolding of a ruling principle. Everything to Plato was the pro- duct of an " idea of the Good " ; everything to Aristotle was a step in the development of the ends of an intelligent Nature. To exist, for both of them, meant to embody or to express an idea, or plan.
At the summit of all things, the principle and centre of the phenomena of the human and the natural world, was a creative plan or intellect, always carrying itself forth into activity, everlastingly productive, and consciously surveying and embracing its own several manifestations.
The question as to the materials employed in order to carry out these plans was noticed by these thinkers only as it served to illustrate the process of realization. At least, this is the case with Plato to a large degree, to a less degree with Aristotle. The point on which both schools originally laid most stress, next to their fundamental principle, was an analysis of the order and concatenation of existence as a reasonable and intelligent system.
They fixed their attention on the connection of one idea with another, on the relationship between one stage in the complex scheme of actual existence and another. To bring together and to divide, to see differences where they are concealed, and to find sameness be- tween things different, to discriminate and connect kinds and classes, is, according to Plato, the main work of that discussion or conversation (dialectic) which is the true art of the philosopher.
The distance between the age of Plato and the age of Zeno and Epicurus, the founders of the two new sects which supplanted their predecessors, may be illustrated by the character of the comic plays, which found favour with either.
The comedy of Aristophanes has for its scene the main resorts of the public political life of its time. It is a caricature of public men and public measures. Athens, with its foreign relations and its domestic politics, is the topic which reappears in a hundred shapes and drags into its compass even the inmates of the women's chamber and the characters and ideas of the public thinkers. In the new comedy of Menander and Philemon, public life is unknown.