Reminiscences of an athlete 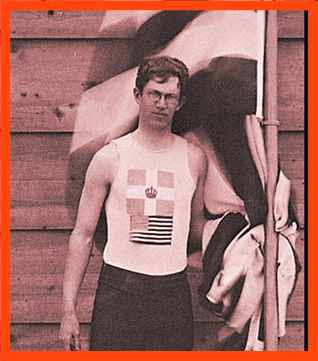 I can not remember the time when I was not interested in the sport. There was no form of exercise which did not appeal to me, and this whether I took part myself, or, as a mere spectator, applauded the performance of others.
To run fast or enduringly, to leap high or far, these had, for me, the savour of great deeds; and upon those who did them worthily, I gazed with awe, as upon beings of a superior world. I am sure of the facts, yet when I look back and seek to find the reasons for them, I can scarcely seem to hit upon the cause. I was not reared in an athletic atmosphere; there were no family traditions to be maintained. It was, I think, simply a natural bent; the germ of the athletic fever was in my blood.
Stevenson has told us how he learned to write, not so much because he wished to be an author, although he wished that too, but principally, as it were, "in a wager with himself." And thus my own ambition, though a far less noble one, was in kind the same. I wished to be an athlete, yet it was not for the sake of the medals or the glory, although, to borrow Stevenson's phrase, perhaps "I wished that too." But my main incentive, like his, was a wager with myself.
There was much that I aimed to acquire, yet it was not to excel others that I practised and trained. A certain standard of accomplishment was always before me; and to know, in my own heart, that I had attained it that was my desire. I had two playmates, in these early days, both inspired by the same ambition as my- self.
The result was a union of forces, and while all of Boston knows that its athletic club, the B. A. A., was formed in 1887, how many Bos- Estonians, I wonder, though skilled in local history, know that before this there was a B. A. C., which flourished in 1881, and a year or so later languished and died.
Yet such was the fact, for my two friends and I were its founders. And although, as it seems to me now, scarcely old enough to read and write, we had a constitution and by-laws. More than that, we had a club badge, <a little oblong of crimson silk, with the letters B. A. C. embroidered upon it in gold, and a silver pin with which to fasten it to our coats.
An air of mystery, dear to all small boys, surrounded us, and thus no profane outsider was ever to guess the existence of our Club. Except in secret meetings, the order of the letters was to be reversed, and to the ear of the world, we were to talk only of the doings of a certain "CAB." Altogether, we were quite elaborate, and existed, as I say, for upwards of a year.
the book details :