A manual of zoology 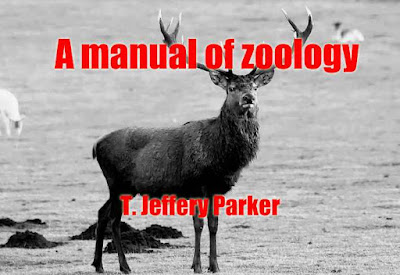 In planning the present work the aim of the authors has been to provide a manual embodying a course of study adapted to the requirements of the student chiefly in higher classes of schools, and to some extent in junior classes of universities.
To make this, within the necessarily narrow limits of space imposed, anything more than a bare synopsis, it has been necessary to restrict the extent of the ground covered. This has been done
(1) by leaving out altogether certain classes of existing animals;
(2) by omitting all de- scriptions of extinct groups ;
(3) by dealing only very briefly with embryology. Opinions must differ as to the best selection of groups for an elementary manual of this kind. But broadly, there can, it has appeared to us, be little doubt that what should be omitted, or only briefly dealt with, are the groups of rare occurrence and uncertain relationships, the greater part of the space being devoted to the more familiar representatives of the large phyla.
A course of laboratory and museum instruction, supplemented by work in the field and on the seashore, is absolutely necessary in order that any sound knowledge of zoology may be attained.
The present manual does not provide such instruction but is intended to be used in association with it, and the examples selected for description are such as may under most circumstances be readily obtained. The general plan is similar to that followed in the Text-Book of Zoology by the same authors, but the restricted space has necessitated considerable modifications.
We have not adopted the method, followed in various recent manuals, of beginning with one of the larger Invertebrata or with a vertebrate, and working from that upwards and downwards. The reasons are given for such a mode of treatment we understand to be that if we begin with the simplest animals, the Protozoa, we discourage and embarrass the beginner by introducing him at once into a world entirely new to him, requiring him at the same time to learn the use of an entirely unfamiliar instrument the microscope. But in our opinion, the difficulty is much less than is alleged by the advocates of the alternative method, and the advantage of presenting the facts at the outset in a natural and logical order by far outweighs any such disadvantages.
We are convinced that any general acquaintance that the student may possess beforehand with a rabbit or a crayfish will be of little real value to him when he begins to take up seriously the study of its structure. Moreover, elementary knowledge of the use of the microscope is absolutely essential to any adequate study of Zoology as an intellectual discipline, and this difficulty, such as it is, may as well be met first as last.
Owing to the lamented death of Professor T. Jeffrey Parker, at a time when but little progress had been made with this work, his actual share in it has been but slight: but as it was planned between us, and the earlier parts had the advantage of his revision, and more especially as it owes a great deal to his work in the Text-Book it has been thought right to let it appear under our joint names as originally intended. I have to express very great indebtedness to Professor W. Newton Parker for the pains he has taken in revising the proof-sheets and for many valuable suggestions which he has made during the progress of the work.
Zoology, the branch of Natural History that deals with animals, is one of the two subdivisions of the great science of Biology, which takes cognizance of all organisms, or things having -life, as distinguished from such lifeless natural objects as rocks and minerals.
The second of the two subdivisions of Biology is Botany, which deals with plants. The subject matter of Zoology, then, is furnished by the animals which inhabit the land surface, the air, and the salt and fresh waters of the globe; the aim of the science is to find out all that can be known of these animals, their structure, their habits, their mutual relationships, their origin.
The first step in the study of Zoology is the recognition of the obvious fact that the innumerable individual animals known to us may be grouped into what are called species, the members of which resemble one another so closely that to know one is to know all.
The following example may serve to give the reader a fairly accurate notion of what zoologists understand by species, and of the method of naming species which has been in use since the time of the great Swedish naturalist Linnaeus.
The domestic cat, the European wild cat, the ocelot, the leopard, the tiger, and the lion are animals which agree with one another in the general features of their organisation — in the number and form of their bones and teeth, in the possession of retractile claws, and in the position and characters of their internal organs.
No one can fail to see that these animals, in spite of differences in size, colour, markings, etc., are all, in the broad sense of the word, "cats."
This is expressed in the language of systematic Zoology by saying that they are so many species of a single genus.
the book details : Download a manual of zoology - PDF ebook 17.4 MB Contains illustrations