Auto-suggestion; what it is and how to use it 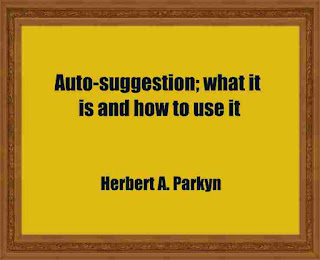 During the years 1903 and 1904, I published a series of articles on auto-suggestion in the
magazine Suggestion. From the reception accorded the series and the great demand for back numbers of the magazine, which could not be supplied, I decided to revise the articles, make some additions and publish them in their present form.
It is only within the last few years that we have thoroughly recognized the existence of one of the greatest forces in Nature, auto-suggestion, and the part it plays in influencing health, happiness and success; and the more we study its operations the clearer becomes the ex- planation for so many things that formerly appeared to belong to the realm of occultism. It is now a demonstrable fact that all the phenomena of Christian Science, Magnetic Healing, Divine Science, Mental Science, Sacred Shrines, Absent Treatment, Success Circles, etc., are due to auto-suggestion. In fact, the majority of cures made under the direction of the practitioners of the various schools of medicine can be traced directly to the same cause, and progressive physicians everywhere are now studying the phenomena of auto-suggestion, and the leading monthly medical magazines are teeming with valuable contributions on psycho-therapeutics.
Every human being is continually in- influenced by the subtle power of auto-suggestion, for it enters into every conscious and unconscious action of our lives.
Through its unconscious use, persons have been made invalids for years, only to recover when the character of their auto-suggestions was changed, although the change may have occurred as unconsciously as the harmful auto- suggestions were first developed.
After fourteen years' practical experience with Suggestive Therapeutics in the treatment of patients, I have no hesitation in saying that the most important study connected with the healing art is the study of auto-suggestion; but auto-suggestion plays such a vital part in our daily lives, in the forming of character and in our successes and our failures, that it should be studied and understood by everyone in every walk of life. In these few chapters,
I have endeavoured to show what auto-suggestion is, and have given a few illustrations to show how it can be used to its advantage when understood. During the time these articles were appearing in Suggestion I received scores of letters from persons who claimed they had relieved themselves of long-standing troubles by following the simple instructions given therein, and I sincerely hope they may prove as beneficial to many other sufferers in their new form. To those who desire to make a more thorough study of Suggestive Therapeutics in all its branches, I take pleasure in heartily recommending my larger work entitled, "A Course in Suggestive Therapeutics."