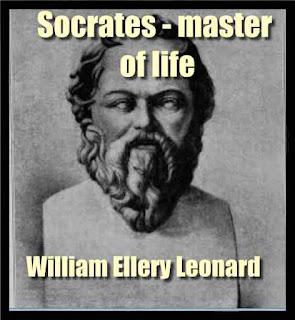 Shelly referred to the great man of our title as "Socrates, the Jesus Christ of Greece," nor was the English poet the first or the last to institute the comparison. The fathers of the church, when answering the jests of paganism, cited the martyr of the hemlock beside the martyr of the cross; free-thinkers of yesterday and today have exalted his ethics and his mission challenge to the Christian world and its prophet.
He has been compared to Buddha and the religious reformers of the ancient kingdoms of Judah and Samaria. Yet, as we shall see, the historic Socrates was no religious zealot and founded no religion. The traditional figure is slowly but certainly undergoing modification wherever men have learned to distinguish Socrates from the men who walk on either side or in front of him; the genuine voice is beginning to sound more clear as our ears separate it from Xenophon's confusing oratory and the insistent music of Plato. And now is there to be any longer reason for numbering Saul among the prophets?
Has the instinct of the generations been wrong altogether? I think not. Socrates, in a sense that would justify the honourable mention of his name and fame in any work on religious leaders, proclaimed long before Paul the unknown God unto the Athenians. Socrates concerns us from the point of view of religious leaders on several grounds: as a soul interested in the salvation of man, as a life witnessing the laws of the spirit, as the central personality of a great people, and as a historic contrast to other more specifically religious types.
Socrates was interested in the salvation of man. Salvation shall be taken out of the vocabulary of the theologians where it has troubled the human race long enough: the salvation of man shall not mean any longer security on a day of judgment; nor even alone the loosening of the bonds of sin. It shall mean emancipation from all that hobbles or shackles the mind —emancipation from ignorance, uncouthness, stupidity, gloom, fear, and the whole interminable train of devils, among whom sin, though chief, is but one.
The emancipators, the saviours, have been many: teachers in the village school, singers in the street, painters at the courts of kings, as well as prophets and poets on the mountain. What Socrates stood for in this multitudinous business of salvation will, I hope, be manifest to us in the sequel. Socrates, as a life witnessing the laws of the spirit, is proof of things beyond time.
There is the universal, the transcendental implication in every man — in the farmer harvesting his grain against the winter snows, in the grimy machinist who sits in the night school, in the thief and the prostitute whose miseries, deducible from violations of the universal, hint at the implication no less. But there are a few men and women who have given majestic and im^ posing proof: they are the incarnations in that mythology which is our poor best interpretation of the truth and beauty of the divine something which sustains the world. Among them perhaps is Socrates. And in a humbler sense, too, he is beyond time.
We of today have far enough transcended the pitiful helplessness of that old Greek world in turning nature to account for our own convenience. We have steamboat and railroad — we ride faster; we have telephone and wireless — we speak. farther. But, though in devising these wonders we also are assisting in the emancipation of man, let us not deceive ourselves: the most vital matter is still not how fast we ride, but for what ends; not how far we speak, but to what purpose. The deepest problems are the same as then, and Socrates was perhaps nearer to their solution than some of us.
Contents:
Note iii
Selected Bibliography v
Introductory 1
Old Athens 16
The Son of Sophroniscus 31
The Thinker 62
A Personality lOS
Influences 112
book details : Download 1.9 MB