The conflict between individualism and collectivism in a democracy 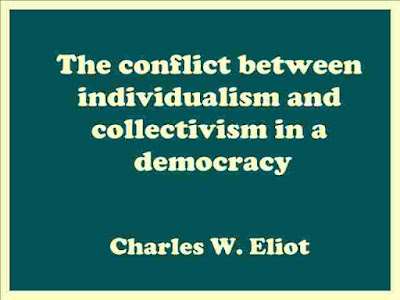 Excerpt:
All through the nineteenth century, a conflict was going on in all civilized nations between two opposite tendencies in human society, individualism and collectivism. Till about 1870 individualism had the advantage in this conflict; but near the middl£«jo£-the- century collectivism began to gain on individualism, and during the last third of the century collectivism won decided advantages over the opposing principle^ Individualism values highly not only the rights of the single person but also the initiative of the individual left free by society.
Collectivism values highly social rights object to an individual initiative which does mischief when left freeholds that the interest of the many should override the interest of the individual, whenever the two interests conflict, and should control social action, and yet does not propose to extinguish the individual, but only to re- strict him for the common good, including his own.
At the outset, it will be well to point out that collectivism should not be confounded with socialism. Socialism dwells on the sharp and unnatural division of society into a few owners of land and machinery on the one hand, and ^ many wage-earners on the other, on the small share of the wage-earner in the product of his industry, on the wrongfulness of private property, and on the waste and cruelty of competition.
Collectivism is not concerned with any of these matters. Socialism advocates the ultimate ownership of all the means of production, including the land, by society as a whole, and as a step, that way advocates immediate government ownership of public utilities. Collectivism has no general theory on that subject, and in practice is simply opportunist in regard to it
. These days there is socialism which has no destructive or >/ violent quality but is in its doctrines extremely enervating to the individual man or woman. It would have society as a whole provide against all the trials and disasters of life. Are wages in any industry unreasonably low?
It would have the government raise them. Is any married pair unable on account of incapacity or poverty, or unwilling on account of laziness or indifference, to bring up their children well?
The government shall take charge of the children, and feed, clothe and educate them. Are any able-bodied persons, male or female, unemployed?
The state shall employ them, and shall carry on any farms, shops, factories, or mines needed to furnish the employment. Are there any sick, disabled, or old people who cannot support themselves .? Society as a whole shall support them. Are any marriages unhappy, childless, or wearisome?
Let the state facilitate by legislation the loosening of bonds that have become unprofitable both economically and sentimentally, and do what it can to break up family exclusiveness based on either economic or sentimental grounds.
These are doctrines which, if carried into practice, would impair the family as the unit of social organization, and would take away from the individual man ^or woman most of the motives which now prompt to industry, frugality, foresight, conjugal fidelity, and loving devotion to those members of the family who are either too young or too old for productive labour.
The state would become a vast charitable institution, exercising a universal despotic benevolence. Compulsory labour would be the rule for the individual citizen, to whatever amount the state judged necessary to enable it to meet its enormous expenditures for the common good. The service of the state would be the universal occupation
. Ambition for personal excellence or family improvement and progress would be confined to a very few; morally exceptional persons. The fine arts, / being dependent on individual endowment and initiative, would languish. It would be no object to acquire private property, for if the state were successfully administered everybody would be sure of bare food, clothing, and shelter, and nobody would be able to secure luxuries or transmit savings to children.
With this Utopian scheme, so unattractive to ordinary freemen, the collectivism which is to be discussed in these lectures has nothing whatever to do. Collectivism which has developed so effectively since the middle of the nineteenth century maintains private ^ property, the inheritance of property, the family as the unit of society, and the Liberty of the individual as a fundamental right; and it relies on the progress of society on the personal virtues rightly called "homely," because they have to do with the maintenance of a home.
the book details : Download 3.3 MB