The preaching of Islam 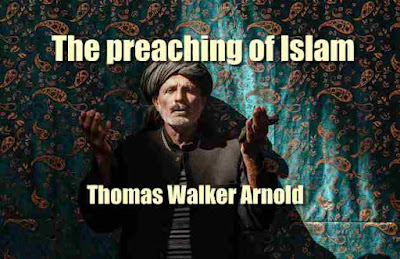 a history of the propagation of the Muslim faith

From introduction:
It is with considerable diffidence that I publish these pages: the subject with which they deal is so vast, and I have had to prosecute it under circumstances so disadvantageous, that I can hope but for a small measure of success. When I may be better equipped for the task, and after further study has enabled me to fill up the gaps ^ left in the present work, I hope to make it a more worthy contribution to this neglected department of Muhammadan history; and to this end, I shall be deeply grateful for the criticisms and corrections of any scholars who may deign to notice the book.
As I can neither claim to be an authority nor a specialist on any of the periods of history dealt with in this book, and as many of the events referred to therein have become a matter for controversy, I have given full references to the sources consulted; and here I have thought it better to err on the side of excess rather than that of the defect. I have myself suffered so much inconvenience.
i wasted so much time in hunting up references to books indicated in some obscure or unintelligible manner, that 1 would desire to spare others a similar annoyance; and while to the general reader I may appear guilty of pedantry, I may perchance save trouble to some scholar who wishes to test the accuracy of a statement or pursue any part of the subject further.
The scheme adopted in this book for the transliteration of Arabic words is that laid down by the Transliteration Committee of the Tenth International Congress of Orientalists, held at Geneva in 1894, with the exception that the last letter of the article is assimilated to the so-called solar letters. In the case of geographical names, this scheme has not been so rigidly applied — in many instances because I could not discover the original Arabic form of the word, in others (e.g, Mecca, Medina), because usage has almost created for them a prescriptive title.

CHAPTER I.
INTRODUCTION.
A missionary religion is defined. Islam spread by missionary methods and not by the sword. The Qur'an enjoins preaching and persuasion and forbids violence and force in the conversion of unbelievers. The present work history of missions, not of persecutions i
CHAPTER II.
THE STUDY OF THE LIFE OF MUHAMMAD IS CONSIDERED AS A PREACHER OF ISLAM.
Muhammad  Account of his early efforts at propagating Islam, and of the conversions made in Mecca before the Hijrah. Persecution of the converts, and Flight to Medina, Condition of the Muslims in Medina: beginning of the national life of Islam. Islam offered (a) to the Arabs, {6) to the whole world. Islam declared in the Qur'an to be a universal religion, — as being the primitive faith delivered to Abraham. Muhammad was the founder of a political organisation. The wars of Muhammad, not aggressive, but defensive. The spread of Islam and the efforts made to convert the Arabs after the Hijrah. The ideals of Islam and those of Pre-Islamic Arabia contrasted 8
CHAPTER III.
THE SPREAD OF ISLAM AMONG THE CHRISTIAN NATIONS OF WESTERN ASIA.
Causes of the early successes of the Muslims. Conversion of Christian Bedouins: arrangements made for the instruction of the converts. Toleration extended to those who remained Chris- tian. — The settled population of the towns: failure of Heraclius's attempt to reconcile the contending Christian sects. The Arab conquest of Syria and Palestine: their toleration: the Ordinance of 'Umar; jizyah paid in return for protection and in lieu of military service. Condition of the Christians under Muslim rule: they occupy high posts, build new churches: revival in the Nestorian church. Causes of their conversion to Islam: revolt against Byzantine ecclesiasticism: influence of rationalistic thought: imposing character of Muslim civilisation. Persecutions were suffered by the Christians. Proselytising efforts. Details of conversion to Islam. — Account of conversions from among the Crusaders. — The Armenian and Georgian Churches . . 42
CHAPTER IV.
THE SPREAD OF ISLAM AMONG THE CHRISTIAN NATIONS OF
AFRICA
Egypt: conquered by the Arabs, who are welcomed by the Copts as their deliverers from Byzantine rule. Condition of the l.opts under the Muslims. Corruption and negligence o' '"^ clergy lead to conversions to Islam.— Nubia: relations with Muhammadan powers: political independence maintained until their conversion to Islam: not converted by force, but through Jh5_decay of the Christian faith and the influence-of -Muslim merchants.— Abyssinia: the Arabs on the sea-board: missionary efforts in the fourteenth century: invasion of Ahmad Grange: conversions to Islam: progress of Islam in the present century: persecution of the Muslims.— Northern Africa: the extent of Christianity in North Africa in the seventh century: the Christians are said to have been forcibly converted: reasons for thinking that this statement is not true: toleration enjoyed by the Christians : the gradual disappearance of the Christian Church . . 87
CHAPTER V.
THE SPREAD OF ISLAM AMONG THE CHRISTIANS OF SPAIN.
Christianity in Spain before the Muslim conquest: miserable condition of the Jews and the slaves. Early converts to Islam. Corruption of the clergy. Toleration of the Arabs, and influence of their civilisation on the Christians, who study Arabic and adopt Arab dress and manners. Causes of conversion to Islam. The voluntary martyrs of Cordova. The extent of the conversions. 112
CHAPTER VI.
THE SPREAD OF ISLAM AMONG THE CHRISTIAN NATIONS IN EUROPE UNDER THE TURKS
Relations of the Turks to their Christian subjects during the first two centuries of their rule: toleration extended to the Greek Church by Muhammad II. : the benefits of Ottoman rule: its disadvantages, the tribute-children, the capitation tax, tyranny of individuals. Forced conversion is rare. Proselytising efforts made by the Turks. Circumstances that favoured the spread of Islam: degraded condition of the Greek Church: failure of the attempt to Protestantism the Greek Church: oppression of the Greek clergy: moral superiority of the Ottomans: the imposing character of their conquests. Conversion of Christian slaves. — Islam in Albania, the conquest of the country, independent character of its people, the gradual decay of the Christian faith, and its causes;— in Servia, an alliance of the Servians with the Turks, conversions mainly from among the nobles except in Old Servia; — in Montenegro; — in Bosnia, the Bogomiles, points of similarity between the Bogomilian heresy and the Muslim creed conversion to Islam; — in Crete, conversion  oppression of the Venetian rule, conquered by the Turks, conversions to Islam