A history of creeds and confessions of faith 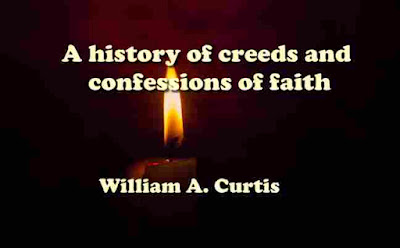 in Christendom and beyond: with historical tables

From Introduction:
I believe there is room, and need, for a book such as this on the Creeds and Confessions of the religious world, which is a single volume that aims at supplying not only the scholar and student but also the general reader, with accurate information he requires for an intelligent appreciation of the history and literature of dogma.
The age in which we live does not number among its feverish activities the business of creed-making. But it is more patient than its forerunner, and more reverent, towards the great monuments of the craft. With the revival of constructive theology, certain wistful envy of their intellectual confidence and thoroughness is making itself heard in our midst. What Ruskin says by way of explanation of our inability to create new styles or orders in architecture, may well be applied to the province of theology to account for our confessional sterility: " We cannot design because we have too much to think of, and we think of it too anxiously."
We hesitate to design, and to build because we have surveyed the ruin of too many past systems and are fastidiously looking for im- perishable materials as well as for an unimprovable design.
The house we long to build is to be vaster, capable of accommodating under its spreading roof, not individuals or families only, but churches, peoples, even religions. And we suspect that if all men are to live in it, all must have some voice in the adjustment of the plan, — their spiritual comfort must be consulted if it is to be their lasting home. But if we are not making Confessions of Faith for ourselves, we are thinking about it; we are interested in the handiwork of earlier ages, and we can contemplate it without a Vandal impulse of the fingers to destroy it.
If we have been through the conflict of faith, and feel, like King David, that other hands, heirs of the quiet we have wrested from the grip of war, must build the fair House of God, at least we have the Temple of Truth in secret vision, and we are gathering the stone and lime, the timber and the metal, against the day of its building, when it comes.
This book has been written in the spirit of that vision. Throughout History, restraint has been laid upon the author's individual opinions, in a sincere attempt to review with honesty and fairness and charity the great dogmatic systems of the Christian world, to exhibit their contents without prejudice or distortion, and to glance with sympathy across the Christian boundary at kindred documents beyond, so far as they are known.
I am persuaded that an unbiassed retrospect over the past efforts of the Christian Churches to formulate the essence of their faith, though it must inevitably move one to a certain sadness that, in their quest after the truth as it is in Jesus Christ their common Lord, they found it necessary to part so frequently and at times so widely from one another, may with equal justice move one to a feeling of pride and satisfaction that the quest has been so unremitting, so earnest, so conscientious, so fruitful of discovery, so rich in an educative experience.
There are signs that Christian missionary enterprise is stimulating other faiths to formulate their characteristic tenets with precision and self-scrutiny hitherto unknown, and it is probable that the future will receive from them substantial additions to the library of dogma. But the apologist may with perfect confidence point to the Confessions of Christendom as unique, and as evidence of the unexampled power of Christianity to appeal to the intellectual instincts of mankind. My debt to earlier writers, in particular to Philip Schaff, is of the heaviest.
A sense of my obligation accompanies each reference to their books. I owe a special acknowledgement to the editor of the Encyclopaedia of Religion and Ethics, at whose commission I undertook to prepare the Article on " Confessions," a great part of which has been incorporated in this work with his consent; to the Reviewers of various denominations whose notices of the Article encouraged me to think that in my short survey of the Churches of Christendom I had been neither inaccurate nor unfair; and finally, to my Alma Mater, which honoured me with its Doctorate in Letters in recognition of the work which forms the substance of this book.

CHAPTER I.
INTRODUCTION. CREEDS AND CONFESSIONS IN GENERAL.
Faith and its confession as elements in Religion — The place of dogma in Science, Philosophy, Art and Morals — Dogma fallible yet necessary to Religion as a skeleton to the living body — The synonyms of Creed and Confession — The evolution of confession from the spontaneous utterance of faith in a person or persons to the learned summary of doctrine — The Creed as an ejaculation of personal faith — The Creed as the spontaneous outcome of the faith of a Community — The Creed as a liturgical form — The Creed as a passport to admission or initiation, a Symbol — The Creed as a public testimony — The Creed as a doctrinal apology or vindication — The Creed as a settlement of the controversy, as authoritative dogma — The Creed as a basis of church union — The Creed as a test of orthodoxy, and standard of discipline — Plan of the book
GENERAL BIBLIOGRAPHY OF THE SUBJECT . . .1-10
CHAPTER II.
CREEDS AND CONFESSIONS OUTSIDE HEBREW AND CHRISTIAN RELIGION.
The rarity of such documents in other Religions — The reason — Creed elements everywhere, but creeds proper only in Israel, Persia, Buddhist India, Christendom, and Islam, didactic and missionary religions — Ancient and modern Zoroastrian Creeds — Ancient and modern Buddhist Creeds — The Mohammedan Creed — Confessions in modern India provoked by Christian missionary enterprise — Articles of Arya Samaj, and of Brahmo Samaj — The Hindu Catechism — The Buddhist Catechisms — The Parsi Catechism — Their testimony to the power of Christianity . . . 11-28
CHAPTER III.
CREEDS AND CONFESSIONS IN THE OLD TESTAMENT AND IN LATER JEWISH LITERATURE.
Hebrew Religion not prolific in confessional documents — The Creed of Israel in Deuteronomy, and its reinforcements in the Old Testament— Sects and doctrinal differences in later Judaism — The 5 doctrines of Philo — Epitomes of the Law according to great Rabbis, Akiba, Hillel, and Simlai — The ancient confession of the Jewish Prayer-book — The 13 Articles of Maimonides — Later Rabbinical Summaries — Modern Declarations of Jewish Principles by American Conferences — The Proselyte Confession .... 29-33
CHAPTER IV.
CREEDS AND CONFESSIONS IN THE NEW TESTAMENT.
Confession of Faith in the Gospels — Passages in Mark — in Matthew — in Luke — in John — Confession of Faith in the other Apostolic Writings — Passages in Acts — in the Epistles of Paul — in Hebrews, 1 John, and Jude — Confession everywhere in the New Testament — Comprehensiveness even of its simple forms — The New Testament foundation of the Creeds ... . 34-43
the book details : Download 25 MB