Is it reasonable to worship God? 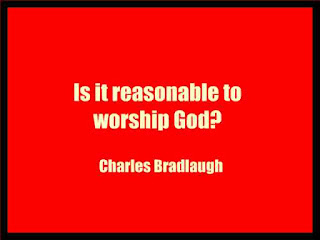 I have been invited to prefix a few sentences to this debate in its published form, and I am glad to avail myself of the opportunity so courteously accorded. Many have criticised my conduct in consenting to meet in public debate one whose teachings, both theological (or anti-theological) and social, they and I alike regard as in many respects of pernicious tendency.
My reply is, that those teachings are influencing large numbers of men and women; that to denounce them, is simply to intensify their influence in some quarters; and that they must be met face to face if their force is to be diminished. I regard oral public discussion as one of the least efficient methods for the discovery of truth, but I cannot blind myself to the fact that it is almost the only method by which what I hold to be true, can get the ear and the attention of some classes of the community; and I perceive that if a man can trust his temper and is also interested in his cause and not in himself, he may in this way do some good which he can do in no other. If it is given him to touch one heart or enlighten one soul, it is a cheap price to pay, that a laugh may go against him, or even that some good and sincere persons may think he has acted wrongly.
The debate itself can only touch the edge of subjects so stupendous as Theism and Worship. But some may be. led by it to thought or to study, on which they would not otherwise have entered. I select three points in this debate for a further word or two :
(1) I said Mr Bradlaugh could not “ conceive a better world.” The expression is ambiguous. He and I both conceive and strive to promote a better state of things than what now exists. But we can conceive no better constitution for a world than that of a world so constituted as to evoke the effort of mankind to advance its progress and improvement. The evil is not in itself good; it is only the necessary condition of good. The moment you conceive a world existing from first to last without evil, you conceive a world destitute of the necessary conditions for the evolution of noble character; and so, in eliminating the evil, you eliminate a good which thousand times outweighs the evil.
(2.) “ Either,” argues Mr Bradlaugh, in effect, “ God could make a world without suffering, or he could not. If he could and did not, he is not all-good. If he could not, he is not all-powerful.” The reply is, What do you mean by all-powerful? If you mean having the power to reconcile things in themselves contradictory, we do not hold that God is all-powerful. But humanity, from the first enjoying immunity from suffering, and yet possessed of the nobility of character, is a self-contradictory conception.
(3.) I have ventured upon alleging an Intelligent Cause of the phenomena of the universe,* in spite of the fact that in several of his writings Mr Bradlaugh has described intelligence as implying limitations. But through intelligence. as known to us in man, is always hedged within limits, there is no difficulty in conceiving each and every limit as removed. In that case, the essential conception of intelligence remains the same precisely, although the change of conditions revolutionises its mode of working.
The metaphysical argument for Theism, though I hold it in the last resort to be unanswerable, can never be the real basis of personal religion. That must rest on the facts of consciousness verified by the results in character flowing from the candid recognition of those facts. It is useless, as well as unscientific, for the Atheist either to deny or to ignore those facts. The hopeless task that lies before him, ere Theism, can be overturned, is to prove that experiences which to many a Theist are more real and more unquestion¬ able than the deliverances of sight, of hearing, or of touch, are mere phantasies of the brain.
the book details : Download 53   MB