Heredity and environment in the development of men 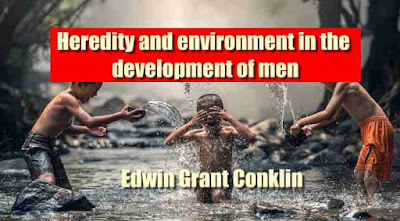 The origin of species was probably, the greatest biological problem of the past century; the origin of individuals is the great- est biological subject of the present one.
The many inconclusive attempts .to determine just how species arose led naturally to a renewed study of the processes by which individuals came into existence, for it seems probable that the principles and causes of the development of individuals will be found to apply also to the evolution of races. As the doctrine of evolution wrought a great change in prevalent beliefs regarding the origin and past history of man, so present studies of development are changing opinions as to the personality of man and the possibilities of improving the race.
The doctrine of evolution was largely of theoretical significance, the phenomena of development are of the greatest practical importance; indeed there is probably no other subject of such vast importance to mankind as the knowledge of and the control over heredity and development. Within recent years the experimental study of heredity and development has led to a new epoch in our knowledge of these subjects, and it does not seem unreasonable to suppose that in time it will produce a better breed of men. The lectures which comprise this volume were given at Northwestern University in February 1914, on the Norman W. Harris Foundation and were afterwards repeated at Princeton University. I gladly take this opportunity of expressing to the faculty, students and friends of both institutions my deep appreciation of their interest and courtesy.
In attempting to present to a general audience the results of recent studies on heredity and development, with special reference to their application to man, the author has had to choose between simplicity and sufficiency of the statement, between apparent dogmatism and scientific caution, between a popular and a scientific presentation.
These are hard alternatives, but the first duty of a lecturer is to address his audience and to make his subject plain and interesting, if he can, rather than to talk to the scientific gallery over the heads of the audience. In preparing the lectures for publication it has not been possible to avoid the technical treatment of certain subjects, but in the main, the lectures are still addressed to the audience rather than to the scientific gallery.
Unfortunately, biology is still a strange subject to many intelligent people and its terminology is rather terrifying to the uninitiated, but it is hoped that the glossary at the end of the volume may rob these unfamiliar terms of many of their terrors.

INTRODUCTION
A. PHENOMENA OF DEVELOPMENT
I. DEVELOPMENT OF THE BODY
1. The Germ Cells
2. Fertilization
3. Cleavage
4. Embryogeny
5. Organogeny
6. Oviparity and Viviparity
7. Development of Functions
II. DEVELOPMENT OF THE MIND
1. Sensitivity
2. Reflexes, Tropisms, Instincts
3. Memory
4. Intellect, Reason
5. Will
6. Consciousness
7. Parallel Development of Body and Mind
B. FACTORS OF DEVELOPMENT
1. Preformation
2. Epigenesis
3. Endogenesis and Epigenesis
4. Heredity and Environment
CHAPTER II. PHENOMENA OF INHERITANCE
A. OBSERVATIONS ON INHERITANCE
Individuals and their Characters
Hereditary Resemblances and Differences
I. HEREDITARY RESEMBLANCES
i. Racial Characters
2. Individual Characters
a. Morphological Features
b. Physiological Peculiarities
c. Teratological and Pathological Peculiarities
d. Psychological Characters
II. HEREDITARY DIFFERENCES
1. New Combinations of Characters
2. New Characters or Mutations
3. Mutations and Fluctuations
4. Every Individual Unique
B. STATISTICAL STUDY OF INHERITANCE
1. Gallon's "Law of Ancestral Inheritance"
2. Gallon's "Law of Filial Regression"
C. EXPERIMENTAL STUDY OF INHERITANCE
I. MENDELISM
1. Results of Crossing Individuals with one pair of contrast-
ing characters
Other Mendelian Ratios
2. Results of Crossing Individuals with more than one pair
of contrasting characters
Dihybrids and Trihybrids
3. Inheritance Formulae
4. Presence and Absence Hypothesis
5. Summary of Mendelian Principles
a. The Principle of Unit Characters
b. The Principle of Dominance
c. The Principle of Segregation
II. MODIFICATIONS AND EXTENSIONS OF MENDELIAN PRINCIPLES
1. The Principle of Unit Characters and Inheritance Factors
2. Modifications of the Principle of Dominance
3. The Principle of Segregation
the book details : Download