Are we a stupid people? By one of them 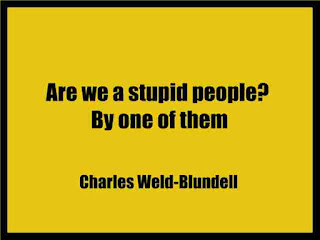 The book talks about morals and habits in Great Britain
At thirty I remained so steadfast in my opinions, that when my father, in 1875, was offered a peerage by the Government of Sir Stafford Northcote and professed his readiness to accept it however personally disinclined to be enrolled in the ranks of the " Beerage," if it would have the effect of keeping me in England and engaging me in politics, I replied that it was impossible to touch pitch and not be defiled and that until England changed her skin, which did not seem likely,
I should still continue to hope in another land to find a state of things which more nearly accorded with the reason and dignity of man than I had found at home. After my father's death, having failed to persuade him to alter the succession to his estates in favour of my younger brother, I took the earliest occasion to address my tenantry upon the evils of party government and the selfish egotism of both Political Parties.
Their local representatives, who were present, instantly claimed me as a Liberal and a Conservative respectively, and in due course separately invited me to stand for the county division. I rejoined by a letter to the principal paper, stating my equal abhorrence from both parties, and my profound disbelief in " party government," ending up with the statement, " that when a really patriotic and national party shall arise in England I should be glad to place myself at the service of my country if so desired."
Later on, finding that the General Election of '84 was likely to turn exclusively upon Home Rule, a subject in which I had always taken the deepest interest and had strongly urged in press and platform, I consented to stand for a large manufacturing northern town, where I was able to put forward my all-round plans of reform ad libitum and acquired a clear, if painful, insight into the ways and means of British politicians.
I found the view formed at the age of twenty-one, in the main, perfectly correct, and after a brief but ineffectual struggle to reconcile British politics with patriotism, and to press the ways of reformation upon unwilling ears, I abandoned the design entirely, not so much because I had grown weak in the faith of my remedies, but because I found that no one wanted to be reformed! Why should they? There would be no money in it. I found that Conservatives and Liberals, with few exceptions, regarded politics as a game whose stakes took the shape of rank, wealth and pensions; that the main difference between the two parties, is that the Liberals of today, out of regard possibly for their great and undoubted achievements in the past, "profess" more loudly than their adversaries, but as for their policy and methods, they are absolutely identical, consisting briefly in (1) "sticking to power"; and (2) "gammoning" the democracy.
Here is the whole art of the British government in a nutshell. Such patriots as existing in England are always found outside Parliament because everything conspires to discourage them from taking a hand inside ; since, if they were once let in they would soon spoil the game. Suet as cannot be prevented from getting in give more trouble to their leader than the entire government of the country.
The pretended patriots, who get in merely to be bought off, are easily silenced by bribes and pensions; but when they are genuine, and there are many such in the Radical ranks — mostly fanatics of sorts — then indeed are the dovecotes fluttered.