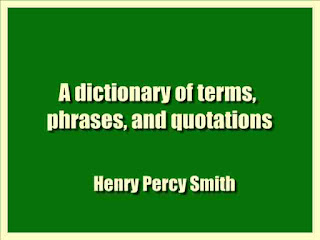 The "Glossary of Terms and Phrases" is intended to bring together such words, expressions, quotations, etc., English or other, as are among the more uncommon in current literature, and require, not for the science but for the ordinary reader, explanations, for the want of which the meaning of a sentence or a paragraph, even the drift of an argument, is often missed; explanations, moreover, not to be obtained without reference to, and perhaps tedious search among, a large and varied number of books, many of them not easily accessible.
In short, the editor indulges the hope that this Glossary may supply all the information needed by general readers, who may ^ylsh to have a fair understanding of the text of any work in ordinary English literature.
Of these terms and expressions, some are pure, some are more or technical and scientific; some are simply uncommon; some contain allusions mythological, historical, geographical; some fall under a very large class, which must be styled miscellaneous; some belong to other languages than our own. But in explaining the words themselves, no attempt has been made to enter further than is necessary into the nature of the things named.
At the same time, the amount of general added to glossarial information must necessarily be very different in different cases. Words, therefore, are omitted (i) of whose actual signification there is no doubt — this book is a glossary, and not as it were a miniature encyclopaedia;
(2) which imply a special. knowledge of the art or science to which they belong ;
(3) which, occurring in writers such as Spenser, Burns, etc., are explained in glossaries attached to them. It is plain, however, that the exact limits of an ordinary reader's needs cannot be defined, and there must be many terms as to the inclusion or rejection of which the editor must exercise his judgment in a Glossary intended as much for the mechanics' institute as for the general reader or the man of education. But his estimate of these needs may, it is hoped, be not very far wrong, while of the real need of some such Glossary experience leaves no doubt whatever.
As to the etymological explanations given, it may be well to say that very often the nearest cognate form simply has been set down — not as implying, by any means, that in all such cases the word has been necessarily borrowed from the one to the other. The references given to books are made, as far as it was possible to make them, to works not difficult of access.
For the explanation of American terms found in the Glossary, the editor begs to express his obligation to the work entitled Mr John Russell Bartlett's " Dictionary of Americanisms.
the book details : Download  A dictionary of terms, phrases, and quotations 53.4 MB