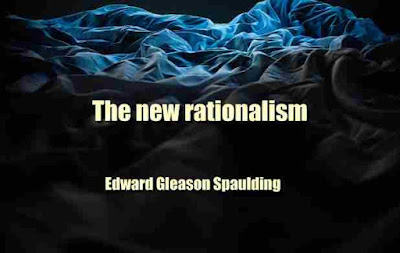 the development of a constructive realism upon the basis of modern logic and science, and through the criticism of opposed philosophical systems

From the introduction:
There is a need, therefore, not only of combating by physical force those physical forces to the use of which such a naturalistic philosophy has led but also of combating and refuting by argument and by a philosophical investigation that philosophy which is used to justify such a physical attack — if only such a refutation can be found.
For if such a refutation cannot be found, then intellectually our attitude should be one of calm acceptance of the outcome, whatever it may be.
It is a most important problem, then, to ascertain whether or not there is possible a philosophical refutation of this naturalism that is challenging the world to the very foundations of its civilization, and, if there is such a refutation, to ascertain what it is, or where its means can be found. Such means are, however, surely not those of merely dogmatically denying the truth of Naturalism, nor of studying its history or development as a philosophy, nor, seemingly, of appealing to the opposed system of Idealism, which in the face of the present horrors that afflict humanity seems to have suffered a collapse in its basic doctrine that "all's well with the A\orld."
But, if the refutation of Naturalism is not possible by such means, then it would seem to me that it is possible only by a philosophy that can demonstrate that, while some "things" evolve, not all "things" are subject to the principle of evolution; that, while a ruthless struggle for existence may be one condition for progress, cooperation is another and, perhaps, more important condition; that, while the best may survive (and may not), the mere fact of survival is itself not identical with being the best; that, while justice may be useful to him who survives, there are, nevertheless, other reasons for the practice of justice than its usefulness; and, finally, that, al-though nature is an undeniable fact, not all fact is identical with ruthlessly combating, slowly evolving, strongest-surviving nature, but that there are some realities which are beyond nature, and which, though they cannot be seen by the eye of the body, are nevertheless revealed to reason.
The only philosophy, however, which can demonstrate these things, — i.e., which can refute and not merely deny Naturalism — is one that, in fearlessly submitting all "things" to reason's testings, includes among these "things" the very means either of defence or of refutation, namely, reason itself. And the only outcome at which such a rational "criticism" of reason itself can consistently arrive is one that justifies its own procedure, and, therefore, any rational procedure whatsoever, as such. But such an outcome means the frank recognition that there are not only facts of the senses, but also facts of the reason and that not all fact is part of nature or of evolution. Such a philosophy is, however, Rationalism.
It is, therefore, both for the student and for the general reader who is interested, first, in problems that concern fact rather than history, and, secondly, in the more specific problem, What is the correct philosophy, Naturalism, or some other opposed system? that this book is written. It is, also, for such readers, in case they are not familiar with psychology and logic, that I have presented certain questions, such as the Problems of Method of Part I., Section III., that are not usually offered in an ' ' Introduction. ' ' These Chapters may be omitted by one who is conversant with their contents, as may also Chapters II., XXII., XXIV., XLIII., vii.-x., if they are found too difficult. In conclusion, I desire to express my appreciation of the sym- pathy and inspiration that I have received from my friends, Professors E. B. Holt, W. T. Marvin, W. P. Montague, R. B. Perry and W. B. Pitkin in the development of a point of view, a method, and, finally, a positive philosophy. The present volume is not cooperative, as was The New Realism in which my five friends and myself collaborated, but it is, nevertheless, in part an outgrowth of frequent discussions with these friends, and of definite attempts to cooperate.
the book details : Download 29 MB