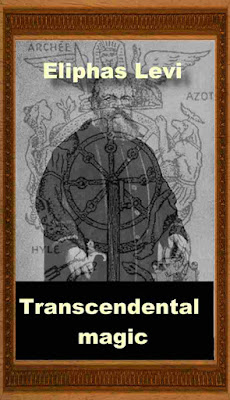 Eliphas Levi is a pseudonym that was adopted in his occult writings by Alphonse Louis Constant, and it is said to be the Hebrew equivalent of that name.
The author of the Dogme et Rituel de la Haute Magie was born in humble circumstances about the year 1810, being the son of a shoemaker. Giving evidence of unusual intelligence at an early age, the priest of his parish conceived a kindly interest for the obscure boy and got him on the foundation of Saint Sulpice, where he was educated without charge, and with a view to the priesthood.
He seems to have passed through the course of study at that seminary in a way that did not disappoint the expectations raised concerning him. In addition to Greek and Latin, he is believed to have acquired considerable knowledge of Hebrew, though it would be an error to suppose that any of his published works exhibit special linguistic attainments. He entered on his clerical novitiate, took minor orders, and in due course became a deacon, being thus bound by a vow of perpetual celibacy.
Shortly after this step, he was suddenly expelled from Saint Sulpice for holding opinions contrary to the teaching of the Roman Catholic Church. The existing accounts of this expulsion are hazy, and in- corporate unlikely elements, as, for example, that he was sent by his ecclesiastical superiors to take duty in country places, where he preached with great eloquence what, however, was doctrinally unsound; but I believe that there is no precedent for the preaching of deacons in the Latin Church.
Pending the appearance of the biography which has been for some years promised in France, we have few available materials for the life of the "Abbe"" Constant. In any case, he was cast back upon the world, with the limitations of priestly engagements, while the priestly career was closed to him and what he did, or how he contrived to support himself, is unknown.
By the year 1839, he had made some literary friendships, including that of Alphonse Esquires, the forgotten author of a fantastic romance, entitled " The Magician"; and Esquires introduced him to Garneau, a distracted prophet of the period, who had adopted the dress of a woman, abode in a garret, and there preached a species of political illuminism, which was apparently concerned with the restoration of la vie. He was, in fact, the second incarnation of Louis XVII. " come back to earth for the fulfillment of a work of regeneration." to  Constant and Esquires, who had visited him for the purpose of scoffing, were carried away by his eloquence and became his disciples.
Some element of socialism must have combined with the illuminism of the visionary, and this appears to have borne fruit in the brain of Constant, taking shape ultimately in a book or pamphlet, entitled " The Gospel of Liberty," to which transient importance was attached, foolishly enough, by the imprisonment of the author for a term of six months. There is some reason to suppose that Esquires had a hand in the production, and also in the penalty. His incarceration over,
Constant came forth undaunted, still cleaving to his prophet, and undertook a kind of apostolic mission into the provinces, addressing the country people, and suffering, as he himself tells us, persecution from the ill-disposed. I But the prophet ceased  M. Papus, a contemporary French occultist, in an extended study of the "Doctrine of Eliphas Levi," asks scornfully: " Who now remembers anything of Paul Augnez or Esquires, journalists pretending to the initiation, and posing as professors of the occult sciences in the salons they frequented? " No doubt they are forgotten, but Eliphas Levi states, in the Histoire de la Magie, that, by the publication of his romance of " The Magician," Esquiros founded a new school of fantastic magic, and gives sufficient account of his work to show that it was in parts excessively curious. t A woman who was associated with his mission, was, in like manner, supposed to have been Marie Antoinette.
See Histoire de la Magi A vicious story, which has received recently some publicity in Paris, charges Constant with spreading a report of his death soon after his release from prison, assuming another name, imposing upon the Bishop of Evreux, to prophesy, presumably for want of an audience, and la vie Ugitimitd was not restored, so the disciple returned to Paris, where, in spite of the pledge of his diaconate, he affected a runaway match with Mdlle. Noe'iny, a beautiful girl of sixteen. This lady bore him two children, who died in tender years, and subsequently, she deserted him.

The doctrine of transcendent magic
Introduction ........ 3
Chapter I. The candidate. Unity of the doctrine qualifications Necessary for the adept ...... 27
Chapter ii. The pillars of the temple. Foundations of the doctrine the two principles agent and patient . . .37
Chapter iii. The triangle of Solomon. Universal theology of
The triad the macrocosm ..... 44
Chapter iv. The tetragram. Magical virtue of the tetrad-analogies and adaptations elementary spirits of the kabbalah. 51
Chapter v. The pentagram. The microcosm and the sign thereof
Power over elements and spirits . . . .60
Chapter vi. Magical equilibrium. The action of the will impulse
And resistance sexual love the plenum and the void . . 67
Chapter vii. The fiery sword. The sanctum regnum the
Seven angels and seven genii of the planets universal virtue of The septenary ....... 75
Chapter viii. Realization. Analogical reproduction of forces Incarnation of ideas parallelism necessary antagonism. 79
Chapter ix. Initiation. The magical lamp, mantle, and staff Prophecy and intuition security and stability of the initiate in The midst of dangers exercise of magical power . . .86
Chapter x. The kabbalah. The sephiroth the semhamphoras
The paths and gates bereschith and mercavah gematria and temurah ........ 89
Chapter xi. The magic chain. Magnetic currents secrets of
Great successes talking tables fluidic manifestations . . 97
Chapter xii. Great work. Hermetic magic doctrines of Hermes the Minerva of the world the grand and unique Athanor the hanged man . . . . .106
Chapter xiii. Necromancy. Revelations from the other world-
Secrets of death and of life evocations . . . .111
Chapter xiv. Transmutations. Lycanthropy mutual posses-
Sions, or embryonic state of souls the wand of Circe the elixir of Cagliostro ... . . . . .120
Chapter xv. Black magic. Demonomania obsessions urban
Grandier girard the work of m. Eudes de Mieville . . 126
Chapter xvi. Bewitchments. Dangerous forces power of life and
Death facts and principles remedy the practice of Paracelsus. 128
Chapter xvii. Astrology. Knowledge of men by the signs of their
Nativity phrenology chiromancy metoposcopy planets and
Stars climacteric years predictions by means of astral revolutions ........ 137
Chapter xviii. Charms and philters. Venomous magic
Powders and pacts of sorcerers the jettatura at Naples the
Evil eye superstitions talismans . . . .144
Chapter xix. The stone of the philosopher Elagabalus.
What this stone is why it is a stone singular analogies. 152
Chapter xx. The universal medicine. Extension of life by
Means of potable gold resurrection abolition of pain. .157
Chapter xxi. Divination. Dreams somnambulism presentiments second sight divinatory instruments alliette and his Discoveries concerning the tarot . . , . .160
Chapter xxii. Summary and general key of the four secret
Sciences. The kabbalah magic alchemy magnetism or occult medicine . . 165
Download Transcendental magic 18 MB PDF ebook Direct Download