Volume 2: The Australian race: its origin, languages, customs, place of landing in Australia and the routes by which it spread itself over the continent 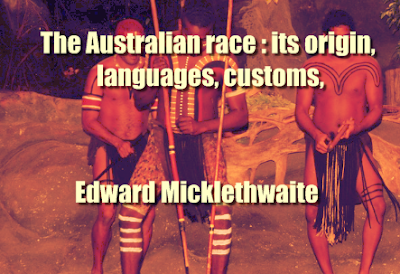 Excerpt:
The tribes whose manners and languages form the subject of this book belong to the Central Division, like those treated of in the two preceding books. In many of these tribes, the principal article of food was a sort of flour, obtained by grinding grass-seeds, which was made into unleavened bread or mixed with water and eaten uncooked.
With these tribes, we come to the termination (in this neighbourhood) of the practices of circumcision and the terrible rite, a fact which is referred to at length in the prefatory remarks to Book VII. In the languages of this book, it is interesting to find paroo and booloo, the two equivalents for fish, also the names of rivers. The explanation probably is that tribes which used these words (the Peake Telegraph vocabulary, for instance, contains both), having become the discoverers of these rivers, which abound in fish, named them respectively Paroo and Bulloo from this circumstance. Edward Micklethwaite Curr was an Australian pastoralist, author, advocate of Australian Aboriginal peoples, and squatter.
have also many points of difference. Indeed the two equivalents of Blackfellow lead to the inference that they represent the dialects of two distinct (though neighbouring) tribes. The first of the two vocabularies, forwarded by Mr D. K. Richardson, gives, in addition, the following names of persons: — Men: Moongulta, Koongulta, Moonaga. Women: Koomilya, Tchoonbilla, Noobillia. For the second vocabulary, I am indebted to Mr Charles Provis, who gives the following names of persons, one of which is given by Mr Eichardson: — Men: Yaljulta, Thangil. Women: Koomilya and Koobillya.
The tribe to the north of the one under consideration is called Wombelbara, and that to the south Korambelbara. Mr Oassady has sent me the following words in addition to those of the Common Vocabulary:
Down - - - yeno.
Across - - dindeyara.
Arm - - - mango.
Knee - - - mokko.
the inferences that this weapon was known to the first comers, or at all events to their descendants before the race had been very much spread, and that miro was its original name? What Mr Johnstone has to say concerning the tribes in this locality is as follows: — About Halifax Bay, there are six bara, or tribes, called ikebana, Dulenbara, Karrabara, Yauembara, Mungalbara, and Mandambara. They speak dialects of one language.
Their country was occupied by the Whites to some extent in 1864, since which period, as the result of measles, consumption, and drink, the numbers composing the tribes have greatly diminished. My informant assigns forty years as the duration of life amongst these people, so far as he is able to judge; but from the short experience yet had of them, it is perhaps premature to offer any opinion on the subject.
Download 10.8 MB PDF book