Through the Russian Revolution 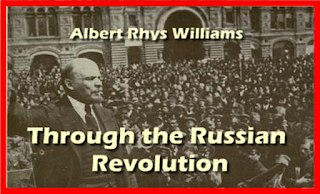 illustrated with photographs and Russian posters in colours

In Moscow, I saw two peasant soldiers gazing at a poster being stuck up on a kiosk. "We can't read a word of it," they cried, indignant tears in their eyes.
"The Czar only wanted us to plough and fight and pay taxes. He didn't want us to read. He put out our eyes." "To put out the eyes" of the masses, to put out their minds and consciences, was the deliberate policy of the Russian autocracy.
For centuries the people were steeped in ignorance, narcotized by the church, terrorized by the Black Hundreds, dragooned by the Cossacks. The protesters were thrown into dungeons, exiled to hard labour in Siberian mines, and hung up on gibbets. In 191 7 the social and economic fabric of the land was shot to pieces. Ten million peasants dragged from their ploughs were dying in the trenches. Millions more were perishing of cold and hunger in the cities while the corrupt ministers intrigued with the Germans and the court held bacchanalian revels with the notorious monk, Rasputin. Even the Cadet, Milyukov, was forced to say: "History does not know of another government so stupid, so dishonest, so cowardly, so treacherous." All governments rest upon the patience of the poor. It seems everlasting,
but there comes an end to it. It came to Russia in March, 191 7. The masses felt that more vicious even than the  Kaiser in Berlin was their own Czar in Petrograd. Their cup of bitterness was full. They marched forth against the palaces to end it all. First, out of the Viborg district, came the working women crying for bread. Then long lines of workingmen.
The police turned the bridges to prevent them from entering the city, but they crossed on the ice. Looking at the red-flagged throngs from his window, Milyukov exclaimed: "There goes the Russian Revolution — and it will be crushed in fifteen minutes!" But the workingmen came on in spite of Cossack patrols on the Nevsky. They came on in face of wilting fire from machine-gun nests. They came on until the streets were littered with their bodies.
Still, they came on, singing and pleading until soldiers and Cossacks came over to the people's side, and on March 12 the Romanov dynasty, which had misruled Russia for 300 years, went crashing to its doom. Russia went mad with joy while the whole world rose up to applaud the downfall of the Czar.
Download 17.7 MB PDF book