The ten tragedies of Seneca 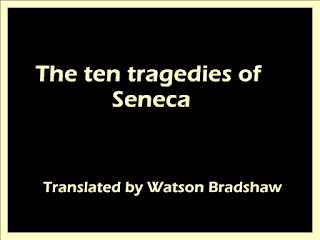 With notes, rendered into English pose as equivalently as the idioms of both languages permit
Contents
Hercules furens.--Thyestes.--Phoenissae.--Hippolytus.--(Edipus.--Troades.--Medea.--Agamemnon.--Hercules (Etaeus.--Octavia.--Notes
Excerpt:
The author of the following Tragedies was born 6 years A.C. and was a native of Corduba in Spain. At an early age, he was distinguished by his extraordinary talents, according to Lempri^re, and was taught eloquence by his father, and received lessons in philosophy from the best and most celebrated Stoics of the age.
He was appointed by Agrippina, the fourth wife of Claudius, as the tutor of her son Nero, who sentenced him to destroy himself, and he is said to have remarked that such a mandate was quite in harmony with the truculent character of the man, who murdered his own mother (see Octavia). I pay no sort of heed to the various aspersions that have been levelled at the character of Seneca, as a renowned poet, for the best of men in all ages have come in for their share of popular abuse and have been made the targets for the poisoned arrows of their calumniators; for further information concerning the life of Seneca,
Download 16 MB PDF book