Around the world on a bicycle 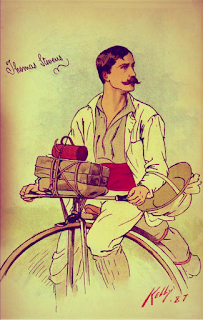 This book is real and the author is very funny, if you have a bad mood, Read some.
This bold youth simply went around the globe to see the people who were on it; and since he always had something to show them as interesting as anything that they could show him, he made his way among all nations. What he had to show them was not merely a man perched on a lofty wheel, as if riding on a soap-bubble; but he was also a perpetual object lesson in what Holmes calls " genuine, solid old Teutonic pluck."
When the soldier rides into danger he has comrades by his side, his country's cause to defend, his uniform to vindicate, and the bugle to cheer him on; but this solitary rider had neither military station, nor an oath of allegiance, nor comrades, nor bugle; and he went among men of unknown languages, alien habits and hostile faith with only his own tact and courage to help him through. They proved sufficient, for he returned alive.
I have only read specimen chapters of this book, but find in them the same simple and manly quality which attracted us all when Mr Stevens told his story in person. It is pleasant to know that while peace reigns in America, a young man can always find an opportunity to take his life in his hand and Originate some exploit as good as those of the much-wandering Ulysses. In the German story " Titan," Jean-Paul describes a manly youth who " longed for an adventure for his idle bravery; " and it is pleasant to read the narrative of one who has quietly gone to work, in an honest way, to satisfy this longing.
Excerpts from the book:

Everybody who writes anything about the Golden State is expected to say something complimentary — or otherwise, as his experience may seem to dictate — about the " glorious climate of California; " or else render an account of himself for the slight, should he ever return, which he is very Unable to do. For, no matter what he may say about it, the " glorious climate " generally manages to make one, ever after, somewhat dissatisfied with the extremes of heat and cold met within less genial regions.

Little children now come trooping in, seeking with eager anticipation the happy privilege of being ranged along the floor like sardines in a tin box, and having the priest walk along with their bodies, stepping from one to the other along the row, and returning the same way, while two assistants steady him by holding his hands. In the case of the smaller children, the priest considerately steps on their thighs, to avoid throwing their internal apparatus out of gear; but if the recipient of his holy attentions is, in his estimation, strong enough to run the risk, the steps square on their backs.

The deck of a Constantinople steamer affords a splendid opportunity for character study, and the Ismidt packet is no exception. Nearly every person aboard has some characteristic, peculiar and distinct from any of the others. At intervals of about fifteen min utes a couple of Armenians, bare-footed, bare-legged, and ragged, clamber with much difficulty and scraping of shins over a large pile of empty chicken crates to visit one particular crate.