Sinbad the sailor & other stories from the Arabian nights 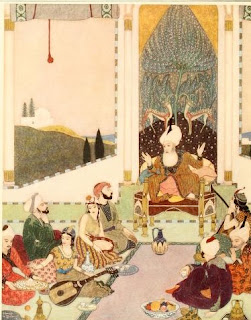 Contents:
Sinbad the sailor -- Aladdin and the wonderful lamp -- The story of the three calenders -- The sleeper awakened

Excerpt:
:
Sinbad the sailor: In the time of Harun-er-Rashid there was, in Baghdad, a rich merchant named Sindbad the Sailor, the source of whose wealth was a mystery. It seemed to be inexhaustible. For long seasons he kept open house, and his entertainments were the most magnificent of all save only those of Er-Rashid himself.
All that riches could buy seemed at his disposal, and he lavished the good things of this life upon his guests. Pages, slaves and attendants there were in great number; his garden was spacious and beautiful, and his house was filled with every costly luxury. This Sindbad the Sailor has a story to tell the story of his life but he never told it to any until, one day, there came to him one Sindbad the Landsman, a man of poor and humble birth. This man pleased him greatly with an apt recitation dealing with the widely different lots dispensed by God to men, and, being pleased, he was struck with the happy conceit that, now Sindbad the Sailor was at last confronted with Sindbad the Landsman, it would be no bad thing were he to narrate the story of his life so that all might know his strange adventures and conjecture no longer as to the source of his fabulous wealth.
Accordingly Sindbad the Sailor held seven receptions on seven different days, and, although on each occasion a multitude of guests was assembled to listen, he failed not to address his words from first to last to his simple listener, Sindbad the Landsman. Following is his narration of the strange and wonderful adventures he experienced in his seven voyages: his father was a merchant of high rank and rich possessions.
He died when I was but a child, leaving me all his wealth. When I reached man- hood's estate I used my inheritance with no thought for the morrow, living in a sumptuous manner and consorting with the richest young men of Baghdad. I continued this life for many years until, at last, when reason prevailed with me to mend my plan, I found with dismay that I had sunk into poverty. And then it was that I arose and sold what goods remained to me for three thousand pieces of silver, and girded myself, resolving to travel to other lands and rebuild my fortune by the wit of my mind and the labour of my hands. With a part of my hoard, I bought merchandise for exchange in far lands, and also such things as I should require in my travels.
Thus prepared I set sail with a company of merchants in a ship bound for the city of El-Basrah. For many days and nights, we sailed upon the sea, visiting islands and passing thence to other islands; and everywhere we bartered, and bought and sold. At length, we came to an island, unlike the others. It seemed like a garden that had floated from off the sides of Paradise and established itself in the sea. And here our ship cast anchor and we landed. Then fires were lighted, and, while some cooked, others washed in the cool stream, and yet others amused themselves admiring the beauties of the place.