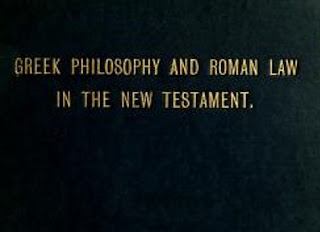 The title will show that the range of subjects is limited both in scope and time. The brief work treats only of two questions, and it relates to the Church history of the first century. It is an attempt to show the probable influence, in character and extent, of Greek philosophy and Roman law on the minds of the New Testament writers; the contribution made by each to the doctrinal thought, or to its formal expression in language; and to exhibit how, in a general way as well as in closer detail, the Gospel was thus assisted in its proclamation amongst mankind. The subject deserves and demands closer and more extended study, to which these pages may, I hope, act as an incentive.
It may be permitted to say that in speculating concerning religion, as well as in science, each hypothesis suggested ought not only to be adequate, i. e. sufficient to explain the phenomena which are under investigation, but also vera, i. e. not only a real fact in Nature but a fact which can be proved to have relation to the special point. If the former condition is met, while the latter is neglected, the hypothesis is a possibility; not a probability; still less a certainty.
[Download This PDF Book ##download##]
Next Post Previous Post
No Comment
Add Comment
comment url
Christianity,Philosophy,Religions