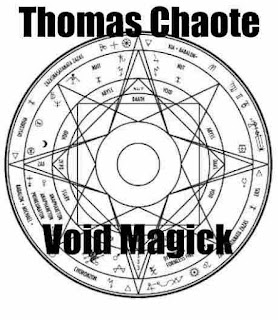 In the beginning, there were a couple of slowly crawling thoughts across my chaotic magickal practice that later connected into one greater area, namely void. I imagined and dreamed a power source with all possibilities included and an undeniable power of negation or disintegration radiating from nothingness.
The actual emptiness, the “lack of something 44 is in many hidden places of my occult explorations and it found itself into a conclusion that there is a possibility of outlining the practice of the undefinable, the void. In researching the term “void magick” suddenly everything becomes diluted by everything else. Material is scarce and mostly connected to religion in terms of abyss, chaos, Kabbalah and the tree of life, afterlife ideas in eastern religions and some citations by different occult authors. I couldn't find a good source that fits and stitches these particles together.
I felt like something very well thought out must be done. Freedom and exploration in chaos magick paved the road to another evolution of my personal occult science. The void became a magickal challenging theme. As I started writing everything down, whole concepts changed from pretty naive and shallow definitions to something more tangible. Disintegration and illusion skills went from a couple of short sentences to often re-worked theories of practical use.
I really had hard but fun times arguing with myself about illusion skills. As I'm always thinking about the power of knowledge and further generations of magicians that may come with great ideas and solutions, this book represents the outlining of the void magickal system that emerged from personal experience. My thoughts shall roam the reader's mind as a new set of different ideas, initiating the right gears of a hidden magick style that was left in the world's unconsciousness.
This idea of the void is not going to leave me easily. Intertwined ideas and intuition are silently prophesying from chaotic sparks of the mind. Tormenting with constant announcements that there are some yet undefined solutions, terminology and ideas seeking words and definition. There are additional skills and practical ways in void magick. I can feel it. Maybe you will discover them inside yourself while reading this book. I believe our future will bring additional knowledge and the subject will expand. The world is the greatest family I have. So I decided leaving this information to chaos, causes and consequences, fate and destiny in the global network of digital and human relations to find its mystical way to you.
What is the Void? It is a great question that has such a variety of answers because void terminology is really hard to describe with strict definitions. Defining void would destroy the void. Its work, form, and existence are undefined. We can only describe it with various adjectives, visions emerging from different cultures, paraphrasing diverse workings, and influences in our Universe. It is mystical, dark, and invisible to human meaning.
Void is absolute null, an emptiness that connects everything, hollowness, the openness of our Universe, an empty lake filled with everything, without forms and with all forms, always changing and morphing, a thick lingering dark mist, infinity of openness, place where mass and time lose their reason for existence.
Quite a universal point of view on such a notorious existence that covers everything, but if we fly down to the really small stuff (quantum levels), inside our being, void paradoxically gets even more meaning. Void becomes a dark gap between material and immaterial, a place between dreams and the world, the unexplained shadow self, undefined matter waiting to get life, ideas urging us to get the form, the shapeless lies of our ego, possible illusions and manifestation of ourselves, the source of our power or weakness, all immersed in the infinite.