Making the most of one's mind 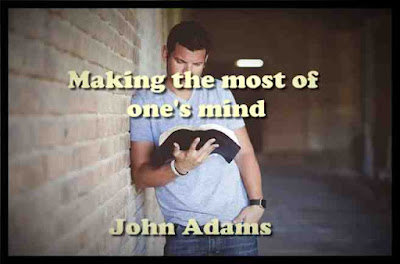 Excerpt:
Among the Romans of the old days when a boy had finished his education and was regarded as fit to enter upon the responsibilities of life, he cast aside the scarlet-bordered gown that boys then wore, discarded the disc of gold, silver, or leather that hung from his neck, and put on the plain black gown, the toga virilis, that was worn by men.
In those days this entrance upon manhood was taken seriously and was accompanied by a certain amount of ceremony. The boy was led to feel that his new estate made heavy demands upon him.
No doubt it meant the removal of certain restraints. Indeed, the manly gown was sometimes called the toga liberator, the gown of greater freedom. But it also implied the imposition of new responsibilities. finally, the donning of the toga virilis meant the liability to military service, for at first the gown was not assumed till the completion of the seventeenth year. Later in the history of Rome, it was assumed at an earlier age.
Indeed, the age varied considerably, but it may be safely said that the scarlet-bordered robe was not discarded before the fourteenth birthday, nor retained much beyond the sixteenth.
This variation is natural, for it is not in human nature to become a responsible person at any definite age fixed beforehand. Boys develop at different rates: some are ready at fourteen for the manly gown, while others might fittingly retain the scarlet border till well over twenty.
After all, the gown was only a symbol. What it signified was that the boy had taken over his life into his own hands. He was henceforth to be, as the saying runs, "his own master," though, as a matter of fact, he was less free from outward restraint than our modern boys.