Lao-Tzu - a study in Chinese philosophy 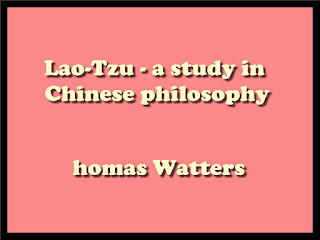 Excerpt:
One of the most remarkable men in the history of China, as also in the history of philosophy, This hook deserves, and has obtained with those who know it, a high place among philosophical works, and the posthumous fortunes of its author have very rarely been surpassed.
That his own followers — or at least those who professed to be and probably believed that they were his followers — should magnify his name was only what we would have expected.
They have raised him from the rank of ordinary mortals, and represented him as an incarnation of deity, showing himself on this earth at sundry times and in various manners.
His conception and birth, his personal appearance, and everything about him has been represented by them as supernatural; and the little philosophic treatise which he composed is regarded as a sacred book.
Much of this has arisen from a spirit of rivalry with Buddhism. The Taoists did not wish to be be- hind the Buddhists in the amount of glory and mystery attached to the reputed originator of their religion; and they accordingly tried to make the fortunes of Laotzii like those of Shakyamuni, the Buddha of the Present. Both Confucianists and Buddhists, however, also regard the Tao-utilising "as a book of deep mysteries and admit the supernatural, or at least marvellous, the character of its author, though, as will be seen, many censure him for teaching doctrines either in themselves mischievous or leading to evil results when fully developed.
During several periods of Chinese history, Laotzii enjoyed government patronage, and almost supplanted Confucius. Indeed, during several of the dynasties which reigned within the first few centuries of our era, there seems to have been a constant struggle for ascendancy between the followers of these two philosophic chiefs. Emperors have done honour to Lao-tzu in his temple, and the sovereigns of the great
Tang dynasty were proud to deem him their lineal ancestor. One emperor has even written an excellent commentary on his book and one of the best editions of the Tao-te-ching as regards textual excellence is that by a Confucian mandarin under the present dynasty.
Buddhist monks also have- edited the book with annotations, and many of them regard it and its author with a reverence second only to that with which the Taoists regard them. It is not only, however, his own countrymen who have given the honour to this prophet.
By Western writers also great and mysterious things have been attributed to him. Some have found in his book an enunciation of the doctrine of the Trinity. The illustrious Eemusat discovered in it the sacred name Jehovah, and many curious analogies with the best philosophic writings of ancient times, and more especially with those of Greece.
the book details :