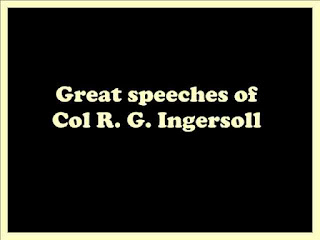 Although Gol. Ingersoll was known for years as a brilliant speaker and leading lawyer, his extended public assaults upon Christianity brought him into national prominence.
While his anti-religious diatribes have been too freely published, his other speeches have not been printed as much as they merited.
The present collection is a complete list of the magnificent orations of this celebrated infidel, lawyer and politician.
These speeches contain some of the finest gems of oratory the world has ever known. To the student of oratory, politics, or humanity, the following pages will prove of great value. To the general reader, they will furnish abundant entertainment.

Abraham Lincoln 199
Ainsworth h R. Spofford's Interesting Table 21
The American Republic, The 195
Aliasing Remarks about Early Rising 18
At Hi* Brother'* Grave 65
B
Bay of the Blood-hound 198
Best Country for the Poor 887
The beat of this Earth 7
Best People, The 124
Beware of Bachelors 259
Bonds and Greenbacks 200
Bondholders 249
Business and the Money Question 7
Buying a Family Horse 117
C
Candidates, The (1880) 129
Candidates of the Two Parties 163
Centralization 126
Chalmers, Mr 116
Charity of Extravagance 251
Coloured Race, The 84
Contraction 285
The contrast between the Farmer and Mechanic 8
The contrast between the Farmer and Professional Man 10
Crash of 1878, The 241
Creditor Claw 284
D
Democratic Blundering 874
Democratic Charge 180
Democratic Metiuicw..,,. 816
the book details :