The metaphysic of experience - V1 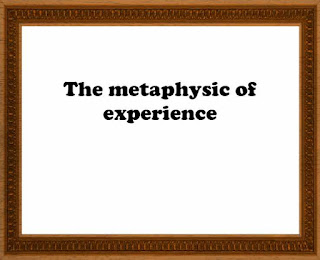 From The introduction:
Very little needs saying by way of a preface to the present work. In the year 1880, my little volume, chiefly literary in character, Outcast Essays and Verse Translations (which was published in the following year) no longer claimed my undivided attention,
I applied myself to a thoroughgoing review and re-examination of the philosophical field. I had already treated the subject in the three works named, together with Outcast Essays, on my title page, as well as in various articles contributed to MIND and other periodicals.
But I resolved to go over the entire subject again, foundations, method, results, and see what new facts I could bring to light, what new steps towards completing my system of philosophy I could take, and what parts, if any, were required to be modified, or perchance retracted, in that system as it stood in my Philosophy of Reflection, in 1878. It also happened in the year 1880, when I was invited to become President of the Aristotelian Society for the Systematic Study of Philosophy, then in process of formation.
The discussions there carried on proved of the greatest value to me for the work I was engaged in, both by way of stimulus to my own thought, and by showing me how the subject presented itself to other minds, what questions which spontaneously occurred to them, and what mis conceptions (as it seemed to me) of the nature, purpose, and method of philosophy were the mos prevalent.
The fourteen Addresses, which ] livered in the fourteen years during which I had the honour of being President, were devoted to giving a clear view of the purpose, method, and relations of philosophy, as well as treating some of its more prominent topics.
They form a sort of outline or program of the present work, which is, as it were, their fore-shadowed substance. My re-examination issued, as perhaps was to be expected, in confirming my conviction of the soundness of those principles of method which had from the first appeared to me as of indisputable validity and cardinal importance. In this sense, the present work is but the continuation of those which I have mentioned as its predecessors.
In my first philosophical work, Time and Space, A Metaphysical Essay, 1865, I virtually broke with Kantianism and its method of proceeding on the footing of apparently indisputable assumptions of matters of fact and placed myself, instead thereof, on a strictly experiential basis, when I enquired what Time and Space (which are Kant s a priori forms of intuition) were positively known as, in immediate experience, without assigning to them a psychologically subjective origin, in or from the side of the Subject of consciousness, as part of the Subject s contribution to systematic knowledge.
"Take," I said, "any empirical phenomenon, from the simplest to the most complex, isolate it from others, treat it as an object of the first intention, and analyse it as such, without asking how it came to be what it is, or whence it derived its characteristics, or what other things it is like. It will be found that all its characteristics fall into two classes; some are material or particular feelings, others are formal, or particular forms in which these feelings appear " (p. 45).
The principle thus exemplified, or proceeding by analysis of experience is the principle upon which all my works, including the present, have been written. At the same time I cannot but avow my belief, that, but for Kant s having singled out Time and Space, and given them special prominence as two, and the only two, necessary forms of intuition, that is, of perception, it would never have occurred to me to begin a philosophical enquiry by selecting for analysis experiences in which they could be treated as the only formal elements.
The Kantian philosophy, and those philosophies which have, as it were, sprung from its loins, never get beyond the psychological point of view, for they are based on the distinction between Subject and Object as an ultimate as well as an indisputable one, however different may be the ways in which the Subject may be conceived by them, and the relations in which it may be conceived to stand to its Object, including the extreme case of its having no other Object but itself.
Hegel s Universe, for instance, is a vast self-conscious Concept (Begri) eternally realising itself in thought, which is a thinking process; being also, in virtue of the activity involved in that process, a Mind or Spirit (Geist), which, by and as part of the same process evolves out of itself human minds, or active concepts, which thus have the same nature of self- conscious self-realisation on a minor scale.
Hegel s philosophy (which he calls Logic) is really the Psychology of that vast self-conscious Mind, into which he imagines that he has resolved the Universe. Dr William T. Harris, who is a devoted Hegelian, in his excellent little work Hegel s Logic (Griggs, Chicago, 1890), calls the philosophical movement inaugurated by Hegel "psychological ontology, or ontology-based upon psychology and identical with Greek ontology in its general view of the world, but far superior in its method" (p. 44).
the book details :