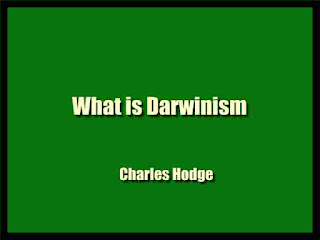 This is a question that needs an answer. Great confusion and diversity of opinion prevail as to the real views of the man whose writings have agitated the whole world, scientific and religious. If a man says he is a Darwinian, many understand him to avow himself virtually an atheist; while another understand him as saying that he adopts some harmless form of the doctrine of evolution.
This is a great evil. It is obviously useless to discuss any theory until we are agreed as to what that theory is. The question, therefore,  must take precedence of all discussion of its merits. The great fact of experience is that the universe exists.
The great problem which has ever pressed upon the human mind is to ac- count for its existence. What was its origin? To what causes are the changes we witness? around us to be referred? As we are a part of the universe, these questions concern ourselves.
What are the origin, nature, and destiny of man ? Professor Huxley is right in saying, "The question of questions for mankind — the problem which underlies all others and is more interesting than any other — is the as- ascertainment of the place which Man occupies in nature and of his relation to the universe of things. Whence our -race has come, what are the limits of our power over nature, and of nature's power over us, to what goal are we tending, are the problems which present themselves anew and with undiminished interest to every man born into the world."
Mr Darwin undertakes to answer these questions. He proposes a solution to the problem which deeply concerns every living man. Darwinism is, therefore, a theory of the universe, at least so far as the living organisms on this earth are concerned. This being the case, it may be well to state, in a few words, the other prevalent theories on this great subject, that the points of agreement and of difference between them and the views of Mr Darwin may be the more clearly seen.
Contents:
Importance of the Question 1
different theories as to the origin of the universe,
and especially of vegetable and animal organisms.
1. The Scriptural Theory 3
2. The Pantheistic Theory 7
3. The Epicurean Theory . .... 10
4. The Doctrine of Herbert Spencer 11
5. Hylozoic Theory 21
6. Unscriptural Forms of Theism 22
Darwin's Theory 26'
Natural Selection 31
The sense in which Darwin uses the Word Natural . . 40
The Three Elements op Darwinism 48
The Exclusion op Design in Nature the Normative Idea of Darwin's Theory ' . 49
Proof of Darwin's Denial op Teleology, from his own Writings 63
Proof from the Expositions of his Theory by its avowed Advocates.
Mr Eussell Wallace ... 64
Professor Huxley . 72
Dr. Biichner 84
Carl Vogt 85
Prof  Haeckel 87
Strauss 147
Proof from the Objections urged by the Opponents of Mr Darwin's Theory.
Duke of Argyll 96
Agassiz 1
Professor Janet 105
M. Flourens 108
Rev. Walter Mitchell Ill
Principal Dawson 119
Relation of Darwinism to Religion .... 125S.
Causes of the Antagonism between Science and Religion . . 126
The Evolution Theory contact to Facts and to Scripture 141
Sie William Thomson on Teleology 165
De. Asa Grey 174
Darwinism is tantamount to Atheism 177
the book details : Download 3.8 MB