The meditations of Marcus Aurelius 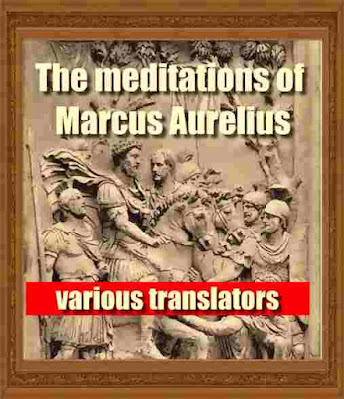 Marcus Aurelius is one of the most virtuous rulers in history, he wrote his thoughts for consolations and to remind himself of good wisdom and quotations that he heard and read.
This book is not just classical literature but a study in human nature,unfortunately human nature have not change since the writing of Marcus Aurelius. This book is inspiring and life changing treasure.

All books are in the public domain

Translated by Meric Casaubon (1599 - 1671)
Meric Casaubon was the son of Isaac Casaubon, a French-English classical scholar. He was the first to translate the Meditations of Marcus Aurelius into English. He is the first to translate this book into English.
This edition is published by London, Dent, New York, Dutton - Contains illustrations - good editing
Download  13.2 MB - PDF ebook

An English translation with an introductory study on stoicism and the last of the Stoics
Gerald Henry Rendall was an English educator and college administrator, born at Harrow, where his father was an assistant master. He was educated at Harrow and at Trinity College, Cambridge, graduating BA as 4th Classic in 1874. He was a fellow and assistant tutor at Trinity from 1875 to 1880.
This book is an introduction to Stoicism and the translation at the end of the book.
Published by London; New York: Macmillan
Download 5.3 MB

4-  The communings with himself  of Marcus Aurelius - C.R. Haines

Good Translation by John Jackson but Introduction by Charles Bigg who was a Church of England clergyman, and theologian, he attacked Stoicism unfairly because he was a jealous and zealous Christian who did not want young people to follow rational philosophy like Stoicism.
Download  6.4 MB

The meditations of Marcus Aurelius in the French Language