A philosophy of social progress 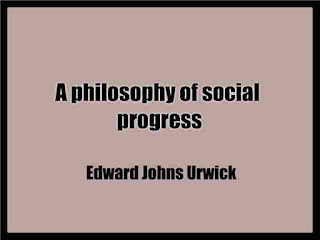 From introduction:
I ask the reader's pardon for a lengthy preface and introduction. It is not necessary, for an understanding of the argument, that either should be read; most readers will do wisely to omit them — as I think they usually do. But both are necessary in order to justify the unusual treatment of the subject which I have adopted and to explain the object of the book. For my aim is a double one:
I have attempted to introduce students and general readers to a point of view that may increase their interest in the study of social life, and perhaps, too, their understanding of the issues involved in all progress and reform; I have attempted also to attack the usual conception of social science, and the usual methods of presenting that science.
Of these two aims, the former has resulted in a treatment of some of the principles of sociology which is at any rate unusual. There is, I believe, no book on general sociology which is satisfactory for ordinary people; and in view of the extraordinary vagueness of the subject, it is unlikely that any satisfactory introductory book will be produced. And yet there can be no doubt that what is known as the sociological point of view is of real value not only to students of social problems and social conditions but to all citizens who are interested in life and the complexities and the changes of their society.
It has seemed to me possible to heighten the interest of both students and citizens by suggesting to them some of the lines of thought and inquiry that most general sociologists follow, and I have attempted to do this in the earlier chapters of this book.
These chapters are not likely to be of any use to the professed sociologist — perhaps of little interest to him, except in so far as they contain much that is open to criticism. But they are not written in order to be a contribution to his knowledge of the subject; and the method of exposition is intended to be, if not exactly popular, at any rate closely enough connected with the concrete facts of modern life to appeal to the interests of any intelligent reader.
My second aim is quite different. All through the book, but especially in the later chapters, there will be found a very marked antagonism to the current con- ception of general sociology, or science of social phenomena.
Closely linked with my desire to introduce students to the sociological point of view is the even stronger desire to show them that sociological science is and must remain a very partial aid to the understanding of our social life; that it is and must be subordinate to a philosophy of that life which passes boldly beyond the domain of any science; and that the true explanation, as well as the justification, of social change, must be sought in the philosophy and not in the science.
To establish this position is the deeper aim of the book; and in this, if anywhere, will lie its value as a suggestion to the professed sociologists.
They are not likely to agree with me; they, and with them, the exponents of various special social sciences, will probably regard me as a foolish and perverse heretic, led astray by an illusory metaphysic. And, unfortunately, the philosophers are likely to find fault too; for the position which I take up is, to say the least of it, rather alien to our traditional philosophies. Consequently, I shall appear as a traitor, though perhaps only a feeble traitor, to both camps.
So be it. My only regret is that the point of view which I consider vital has not yet found a champion better qualified to expound it. I will make bold to state my heresies dogmatically. Sociology is commonly described as the science of social life. I do not believe that there is or can be any science of social life; nor do I believe that sociology is or can be a science.
There is a little scientific knowledge of a few of the conditions under which we social live, of some few of the activities in which our social life is manifested. What passes for sociology is a collection of generalizations of very varying value, and it is inevitable that most social generalizations shall be at once more or less dignified guesses, and more or less disguised expressions of the hopes and fears, the prejudices and beliefs, of their originators.
There may, however, be a philosophy of social life — or rather, of social change; but this will be transcendental, of course, and will always be very closely analogous to religious faith. It will vary from age to age, just as the forms of faith do; that is to say, the expression of its dominant conceptions will vary, thinkers, especially living writers and thinkers, from whom one is conscious of having derived much help.
I hesitate, however, to mention any names, lest I should offend the very people I would like to thank by seeming to saddle them with some responsibility for opinions from which they may most vehemently dissent. But I cannot refrain from expressing my gratitude to two sociologists — Professor L. T. Hobhouse and Mr A. F. Shand — who have been kind enough to read through the whole of the book, and make many valuable and suggestive criticisms.
And I must also express my thanks to three writers to whom I am indebted for both ideas and language used in particular passages : to Dr E. A. Ross, for the account of the "perversity" of civilisation, in Chapter III.; to Mr Victor V. Branford, for the description of the unity of the medieval Church-State, in Chapter VI.; and to Dr Bernard Bosanquet, for the conception of the content of Greek citizenship, in Chapter VII.
the book details :
Download 6.8 MB